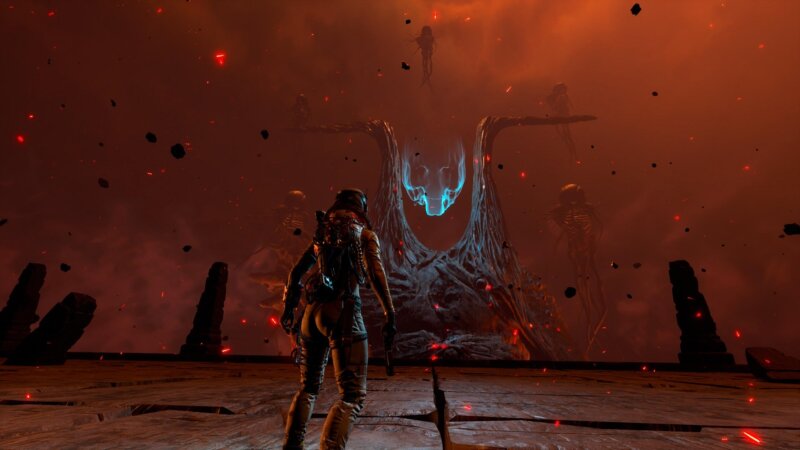 How to defeat Nemesis in Returnal

Once you have mastered the ability to fight him, the big boss is really very easy. It is recommended that you carry a sturdy long-range weapon for this battle; the Thermogenic launcher is particularly good, but avoid things like side guns or anything that has a curvature in its trajectory. You will need bullets to accurately cover long distances, so keep this in mind.

First, when you stand on the big platform in front of Nemesis, it starts throwing things at you. Shoot the big red spot on your chest – this is its weakness and where you want to aim while it lasts. The first few attacks are easy to handle because Nemesis fires a burst of orange bullets and a row of purple rockets at you. These attacks can be avoided by running sideways. Generally speaking, it will shoot more bullets at you, but all these bullets are very easy to handle when you do a strafing.

What you need to be worried about are the four puppet-like things floating around Nemesis. One by one, these will float down toward the battlefield and shoot straight laser beams at you. They’ll first start high, cutting a beam at a diagonal across the middle of the battlefield while Nemesis throws waves of blue bullets; prioritize dodging the beams and slip between the rows of bullets, as they’ll be very spaced out.

After two puppets fire diagonal lasers in each direction, the other two puppets will pounce on you at the same time. These will descend parallel to the ground to sweep the laser across the stage. You have to go through them to avoid them, so keep backtracking to avoid Nemesis bullets after avoiding the beams.

As the four puppets go through the arena, Nemesis will use the blue bullet that is aimed at you to explode, while his puppet will fire lasers directly into the arena, releasing a wave of red energy. See where the waves start so you can beat them; You must do this while avoiding the Nemesis bullets that are aimed at you, which can be more deadly because they are aimed. If a puppet produces three red waves and Nemesis is still in the initial state, it will send two puppets to start cutting the beam in the center of the battlefield. Avoid staying to the side and continue lying over the fire in an attempt to finish this phase quickly to avoid these situations.

Then “Nemesis” began to teleport across the arena, which would shatter and split into pieces. You can use the grip to move around here, and if you fall, you can use it to grab and go back; When facing Nemesis, look for the grab points on the ledge behind you, because these points are usually easier to hook. You can determine the location of Nemesis based on the location of the puppet. Prepare for the fight and start wailing over the weakness. Keep moving from side to side to avoid the bullets sent by the nemesis.

Similarly, the puppet’s laser beam will be a more dangerous attack. The Nemesis will send two people to fire the beams directly on the stage to produce a red wave of energy for you to doge, while continuing to fire at you. If a puppet falls, it usually means that you can expect a ray of light to pass through the stage. If there is a puppet on each side of the arena, you will get two waves of energy (two sets of two together). If there are two puppets on one side of the arena, then it will cut into two beams diagonally in rapid succession. Run through the beam while paying attention to the bullets from Nemesis.

Towards the end of this phase, Nemesis will begin to impose a large number of extra bullets on you, which are difficult to avoid, especially when used in conjunction with lasers. Try to get away from the boss and slide between the spaces; You can switch to other platforms as needed or off the side of the arena in an emergency to avoid getting into trouble and save yourself with the grapple.

This is where things get crazy. The Nemesis will explode, turning all platforms into a series of falling cubes as they send you flying. Falling may scare you for a second, but unless you go very, very far, you won’t fall too far and die. This means that you can jump off the platform at any time; in fact, this is a great way to avoid Nemesis bullets and lasers, as the rig can often act as cover. The grip will save you when you need it. In fact, the grip is like a dash. In most cases, by using it, you can protect it from damage and can reposition your position very quickly. Use it to get rid of danger, do not be afraid to fly.

No matter how far away you are, shoot Nemesis. Do you remember I told you about a gun with good range? You can hit the boss a bit, but move slowly towards him. The puppets are your first clear and current danger, and when you get close they’ll shoot lasers at you. They will aim directly at you, but it is easy to avoid, so find someone who is ready to shoot. Use the platform and Rapple to clear the game, you should never get hit by one of them.

When you get close to Nemesis, he will start sending you multiple bullets and they track a bit better than in the past. Blue bullets are usually easy to avoid – if it is too hot, jump off the sides of the platform. However, when you are in the air, the orange bullets will spread more and be more dangerous, so be sure to use a grip instead of a free fall, as you are an easy target.

Keep shooting, but don’t get too close to Nemesis, because when you get close to Nemesis, it will be more difficult for you to dodge. After a while he might explode again, taking you to the back of the area and forcing you to get closer again, but just repeat the process before and you’ll be fine.

Another thing to avoid is the purple rocket fired by Nemesis. They can be volleys or large groups, but large groups are actually another distraction. When you see a bunch of huge purple rockets blooming, be aware that there are actually only four or five people in the center, which is actually dangerous and will actively rush towards you. The rest will fly on the edge of the area, so avoid the main group. It can be difficult to see them, but when a large rocket explosion is about to occur, use the grapple to get out of the line of fire without accident. This last stage is relatively easy.