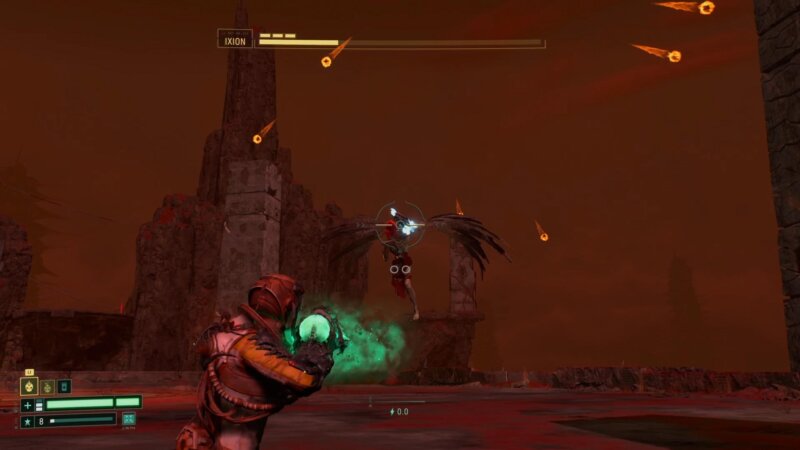 How to defeat Ixion in Returnal

The Crimson Waste boss flies boss Ixion, which can mix air and ground attacks, will be more difficult to handle. However, the head of the boss is a great weakness. If you can continue firing, you can stagger it and remove it from the attack animation when it deals enough damage. That’s a big part of the battle – continuing to hit Ixion’s head will stop the battle for a second, giving you a chance to hit harder.

In the first stage, Ixion will try to hit you with a series of inaccurate bursts of bullets. It will fire a bunch of blue bullets straight at you, which is easy to dodge. When he rushes to a new location he will launch a bunch of orange bullets. These bullets will spread out in all directions. If you want, it can be ignored in most cases. Stay away from them. However, be careful that Ixion charges up and shoots a barrel of blue bullets straight at you; you will have to move quickly to the side to get out of the fire.

Keep hitting Ixion head though, especially using powerful weapons, you can stagger various attack animations. By doing this, you may be able to make the first stage trivial.

Things get more difficult here. Ixion will fly through the air and then land in the center of the arena. Waves of fire will come from boss, which is painful. First you come across a huge blue wall-shaped wave and you have to deal with it. You can try it, but it’s better to skip it. Hold down the X button to make sure the maximum height is reached. On the other side of the wave, there are two orange bullets. They move across the floor towards you.

The space between them is quite large and you can slide between them, while the blue bullets explode from his hands that make being in the air a bit dicier. More or less Ixion can launch three to four such attacks, but as long as you can reliably beat blue waves, none of these are hard to dodge .

After that, Ixion will fly into the air again, coming towards you from the side of the arena, launching two blue-walled waves and a bullet-shaped spiral, filling them. Observe the ring on Selene’s head to understand the source of Ixion so that you can clear her initial state of fall. It is also very useful to wear headphones and listen to Ixion’s direction.

The boss will be crossing the arena in a straight line, so determine where he is coming from and stand well on both sides of the arena, then jump or break the blue waves he leaves behind. It will run three times in a row, but it always seems to come from the same direction, so stay in a safe place and repeat the dashes.

Now, Ixion will hover around, just like in the first stage, firing a series of blue bullets at you and then running away. However, the blue bursts will be more permanent and have better targets, so keep moving sideways and avoid them. If you can hit Ixion’s head here, you can stagger it to avoid these attacks, so do your best to maintain firepower.

When not shooting directly at you, Ixion will fire a large number of blue bullets back and forth across the stage like a sprinkler back and forth across the lawn. If you keep backing far enough, you can position yourself to pass between the gaps between the bullets without causing a problem; if not, quickly break up the group and change positions. However, try moving forward or backward rather than turning sideways.

Towards the end of this phase, Ixion will replace his blue bullets with tracking blue rocket and launch a bunch. Run sideways or dash hard to one side to get clear- These moves are quick, but if you force them to follow when you move left and right relative to Ixion, you can pass them. It will also emit a large blue laser beam in a straight line in front of it, just like the previous Phrike. With a quick lateral movement, you can avoid both.

Ixion will fly back into the air and land in the center of the arena, starting with the waves you dealt with at the beginning of the previous stage. However, this time, the bullets he fired from his hands will be emitted in the form of angled discs, making it difficult to jump over the bullets. Try to keep moving to the side where the top edge of the disc is, you can avoid these situations completely. If they are in front of you, they may hit you. Fortunately, this part only lasts a second and then Ixion goes through a new process.

Here, Ixion drew a melee weapon, from his chest. This is the most dangerous part of the battle: Ixion will follow you directly on the ground instead of flying through the air. Then the boss will jump straight towards you, melee attack and fall. Dash away and run, because the attack will also release a small burst of red energy. He can try to hit you again, but if you ‘re moving away you should be able to get clear of the second strike as well. When they reach you, hop the first two waves and note that Ixion will also launch a third red wave towards you.

Then, Ixion will charge up and start hitting the ground, sending you more waves. These are very slow so it’s easy to jump over, but it takes some time to stay as far away from Ixion as possible. It will now fire bullets at you like a shotgun, showing alternately blue and red. The blue bullet is a dangerous bullet. They will run towards you quickly and directly, and you will have to avoid them.

Red ones are more like red herring because they’re super slow and disperse over time so they’re easy to avoid. However, when you prioritize avoiding fire, they intend to confuse you: pay close attention to the blue guns and avoid them at high speed and keep a distance from Ixion to give yourself time to recognize and avoid the red one.

At this point, get ready to accept more melee attacks from Ixion – you’ll fight for him, jump to avoid the red wave, then dodge and avoid it, because he is greeting you many times. Eventually, it will start to get closer to you, rushing to close the distance and drop the rings of bullets in your direction. Jump, run and escape; walk to the side of the arena where he is not, you should be able to keep your distance in that arena to avoid these attacks. If you want to keep the fire going, it won’t be long until you take down Ixion.