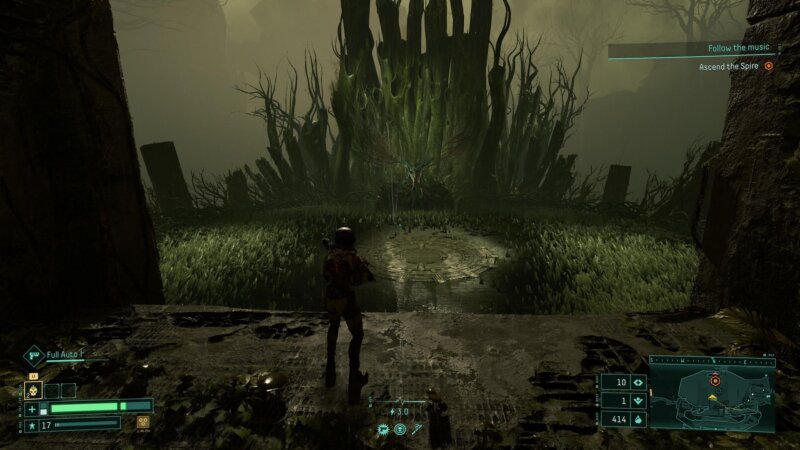 How to defeat Hyperion in Returnal

This may be the toughest boss in the game. Hyperion embodies the nickname of bullet-hell, throwing all sorts of things at you in this battle. The good news is that the boss basically stays put, which means it’s easy to continually hit by fire and shoot from side to side to avoid attacks. The bad news is that they are diverse and wide-ranging – constant movement is necessary, as is the ability to read attacks that occur at all different altitudes, including distant high altitudes.

Of course, the first phase is the easiest, specifically because Hyperion stays in one place the entire time–the back of the arena, at the organ. Unload on it constantly while you dodge the attacks it fires from this one spot. Get used to running side to side from one end of the arena to the other, as this is the best way to avoid a lot of its incoming fire. You’ll also need to get used to jumping and dodging forward so that you can land clear of danger, as Hyperion fires a lot of bullets that track across the ground, making your landing zones perilous.

At the beginning of this phase, stay in good condition, because Hyperion likes to use several attack methods at the same time, so it is difficult to determine the time to dodge and the time to dodge. See if the blue rocket matched with the red energy wave starts, you can shoot and jump easily, especially when moving from the center to the sides of the field. Later, you’ll get rockets, energy waves, and lasers that sweep across the arena at the same time, but the magnitude of the change is enough to make you jump over the rocket and through the beam to protect yourself.

If you don’t, Hyperion will fire a ball of bullets, which will drop to the ground around you, and will also launch a bunch of aimless bullets into the air. If you take a step back, you can generally avoid all problems, but you can limit your activities, so be prepared to use dash to mitigate incoming damage.

Hyperion will then lean into the organ and fire a bunch of bullets from the pipe. These occur in different types of arc blasts. Some will rush down randomly, some will stay in a narrow vertical line, and some will be a rocket to track you down. Keep strafing and dashing sideways, prioritize the rocket; you can measure where the loose bulasts will fall and make sure you stay between the vertical lines, you can easily escape. Keep firing the entire time to finish this part of the phase as quickly as possible.

Here, things get manic. Hyperion leaves the organ and reaches the center of the arena, where it will be anchored and will fire several fierce blasts at you. Never stop moving and strafing, but stay away from the boss. Throughout the process, Hyperion will fire random bullets in all directions around it, but you can almost ignore them – they are meant to crowd your sight, but aren’t targeted and are generally very thin, so make sure you don’t accidentally collide

When you see Blue and Hyperion waving its arms, start running sideways and dodge; you have incoming rockets, many of them. Hyperion will follow up another plume of bullet, which will fall towards the ground around him, but when you see it, his arm will lift up and start dashing again. The boss calls for the vines from the ground, rendering you unable to move and damaging your body, but if you are quick, you can clear and avoid the vines entirely.

Hyperion will try to take the opportunity to slow you down and hit you with two big blasts of bullets lined up in cross: choose a direction and run to the side, running and attacking without taking damage. The cross covers a very large area very quickly, so you really have to commit to avoiding it. Hyperion will send more bullets to the ground while replicating the cross with his tracking rocket. You can usually run through it, but it’s also a great attack and you may need to jump to get past the group of horizontal bullets.

Keep hammering the Hyperion and it should return it to the organ again. You may run into the same dangers as last time, but this time there will be more variants – the rocket is still your top priority, but you can’t stick out too far from the sides because the bullets fall like rain in the ground. Here, jump and run to Hyperion will give you good service, so that you can avoid any danger. Keep shooting. The faster you go through this section, the less damage you’ll take.

If you think this is problematic, be prepared for it; if you have rehab supplies, you may need them here. Hyperion once again appeared in the center of the arena, it will perform all the operations mentioned above, but the changes are scarier and more intense. Hyperion will send bullets into the sky, and then it will rain diagonally, then it will send more bullets across the ground towards you, then it will try to grab you and hug you with vines, so go ahead and prepare before the ground erupts underneath you. It will also fire larger X-shaped blasts, which will go in quickly, but you can avoid it or go through it with relative ease. It will continue as a set of two X-shaped explosions, and will try to predict your direction and fire it where you are going; If you change direction quickly and trade in other ways, you can avoid it.

One of the most destructive operations Hyperion will perform here is summoning a bunch of plants, creating walls on either side of you, locking you in a narrow hallway. Stop moving when you see it bend, because that’s a signal for this move. If you touch the wall, the wall will damage you. Next, stand in the middle and watch Hyperion launch vertical waves of bullets at you. You should be able to avoid them. When dodging these attacks, watch the energy near Hyperion’s feet – when the wall falls, Hyperion will fire a bullet into the ground. These bullets spread horizontally and are difficult to dodge. As soon as those walls fell, they dash clear.

Hyperion will once again summon a rocket cross-shaped attack, but with a quick fire. When these rocket packs appear, try running to Hyperion, because vertical rocket packs are easy to avoid, but horizontal rocket packs will tilt and often immobilize you, even if you try to jump them. Hyperion will pair them with the red energy wave, so don’t forget that when planning a landing.

Constantly beat Hyperion to try to limit the number of times any of these attacks are handled, sending him back to the organs one last time. As mentioned above, this is a crazy sprint that will do as much damage as possible before you get overwhelmed, because a lot is happening here. Stay away from the boss (get too close and it will summon vines again) and constantly run to try and lose the blue rocket as you unload. You still have to deal with vertical bullet waves, groups of bullets falling into a narrow area, and bullet waves scattering from bosses on the ground, where you can take a few hits. If you have any consumables for health, rehabilitation or protection, this may be an emergency worth using.