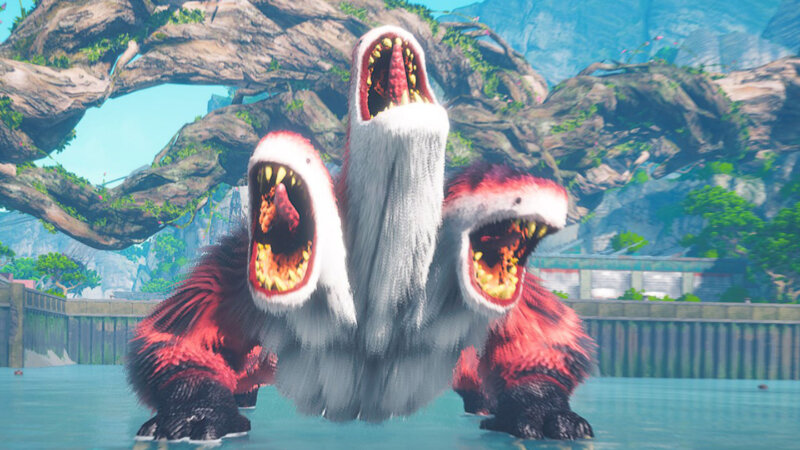 In my opinion, among the various boss fights carried out in Biomutant, the most difficult one is Porky Puff, which is a dangerous three-headed Worldeater that you encountered early in the story.

This powerful enemy likes to send large-scale attacks. It is difficult to avoid. But below, I will explain how to defeat the Porky Puff boss in Biomutant with the greatest difficulty under low-difficulty equipment and barely scratches.

After you have obtained Googlide (the jetboat) from Goop and completed the quest, to get it ready to face the Worldeater; they tell you to defeat the pork puff early in Biomutant. Most of the water in the southeast of the map is an annoying green liquid. Googlide will not be able to pass without an upgraded engine, but you can enter Porky Puff without it. Push your Googlide open the door, enter Porky Puff’s water lair, and start fighting.

How to beat Porky Puff in water

The first piece of advice I can give you is: ignore landmines. They are difficult to use correctly, and even if used correctly, they are almost useless. They are wasting time. Now: Almost all attacks of Porky Puff involve sending you huge waves of water, which are so big that even if you are prepared for it, it is difficult to avoid them. When the pork puff rises to attack, you must push the Googlide at the correct angle to allow enough time to avoid injury.

Once these attacks are controlled, you need to target the four pink pustules on the feet of the pork puffs. Hitting them with any type of weapon will detonate them, causing a lot of damage to the pork puffs each time. After exploding all the pustules, the pork puffs will collapse in a short time, allowing you to receive more injections before it becomes dangerous again.

In short, this is actually the first stage. Pork puffs dive into the water from time to time and start to swim towards you, with their tails sticking out like shark fins. It will be executed four times, and if hit, you will suffer incredibly high damage.

To avoid this, just go around a big circle and the pork puffs will not be able to hit you. Rinse and repeat the above operations until it is taken down to half-health, at which time the cinematic will begin to be shown, and Porky Puff will venture ashore for the second stage of boss fight.

How to beat Porky Puff on land

The Porky Puff on the ground has different attacks depending on how far you are. We recommend staying close, because when you move away, it will start to lob Rocks at you, and can be quite difficult to avoid.

There is a ground slam attack that produces three shock waves in a row, and you must jump over these shock waves. It’s easy (but don’t risk shooting mid-jump, because the combination may waste your jumping time). When you are at a very close range and all three of its heads hit the ground, an attack will occur. Again, it is easy to backtrack in time to avoid it.

Most importantly, you can avoid claw attacks by getting close to the body of the pork puff. Pork puffs usually have a side blow after this attack. Don’t just dodge it-wait until the button prompt appears to dodge the attack, then dodge its claws. This will trigger a QTE, where you can stab the head until it collapses. Avoid collapse, and then take some time to chop off one of its three heads to maximize damage.

Whether you stays close or away for this phase it depends on you. The important thing is to learn how each of its attacks, and the time your dodge correctly. And do not get greedy. Play safely and take your time.