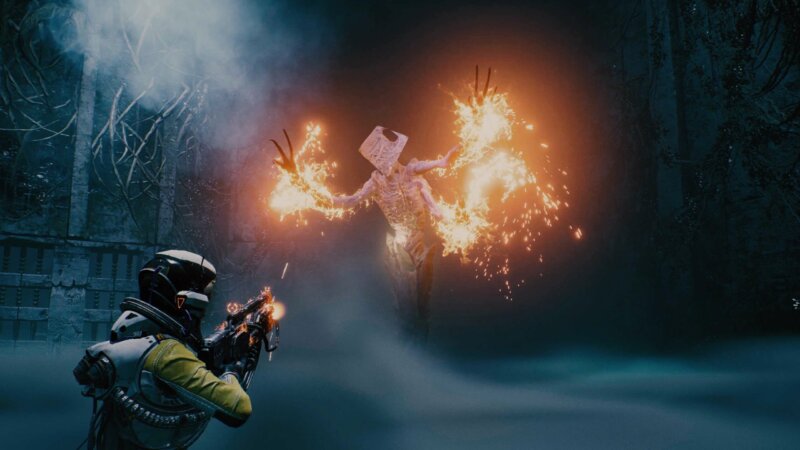 How to defeat Phrike in Returnal

During the first phase of the battle, Phrike is very easy to handle, especially if you stay away from him. The boss often stands still and shoots, and you can usually avoid this by strafing left and right, avoiding it only when you really need to. Keep in mind that how many of its hands are glowing, because this will determine your direction. Be especially careful with the blue rockets from the three-hands.

These fast projectiles will fly through the air and coalesce in place, and will have tracking capabilities, so you have to run or sprint to develop enough speed to escape. He also throws purple plumes into the air with both hands. They fall slowly, but while they may seem troublesome you can usually ignore them, they tend to scatter so much that they can be easily avoided.

When Phrike doesn’t just throw an attack umbrella at you, it’ll also target sharper orange bullets with one hand. Likewise, these problems are easy to avoid by strafing, but they present themselves quickly and will try to direct them at you. If you take a step back, you can sit still and determine how you should avoid them very easily.

Phrike will absorb the energy towards the chest and fire the laser beam from the eyes forward in a rapid and vertical fashion, burning the ground directly in front of the boss. When viewing this content, quickly move to the side; It is easy to clear of, but if you are caught, it will be painful. From time to time, Phrike will disappear and move to a new location in the room. You can expect this by observing the orange glow on the ground, which can show your move and the position of the next move. Stay off course to prepare for the next attack.

When you push Phrike to the second stage, the boss will add two attacks that you need to pay more attention to: blast towards the ground and release a radial wave of energy that you must jump or go through; and a melee attack, he will run towards you, hit you with his arm.

These two attacks appear at the same time, when you are distracted, and then the boss starts catching up. Stay back first to give yourself plenty of time to deal with the waves, and then wait for Phrike to run towards you and sprint, making sure to hold down the dash button to make sure you get the full distance.

So you may need to jump a wave, but it is slow and easy to time. Another way to deal with this attack is to jump up and run into the blast wave when Phrike approaches you, effectively avoiding two actions at the same time, but based on your position in the room it can be tough to judge depending on your location in the room.

You’ll also see that the boss is now using his disappearing fog tricks to hit him point-blank for a melee attack. When you land on the ground, pay attention and be prepared to go through it. Typically, Phrike will perform eye beam attacks in a horizontal direction rather than a vertical direction.

You can jump this, but it’s more reliable to dash through it to avoid hitting it. It’s coming really fast, so once you see that the boss is ready, you’ll be ready to run to the beam.

This last phase will make Phrike’s various attacks twice as dangerous. It will continue to do melee dash, but for now, it’ll usually add a second dash to the mix, immediately after the first, hence two dashes are required. There is a slight delay between the two attacks, so keep your camera angle toward Phrike, so you can see it coming.

When Phrike performs a downward blast attack, you will encounter two slow-moving waves, as well as a melee attack. The best way to solve this problem is to jump and run to avoid melee attacks and land clear of the slower waves.

Now, the same is true for his sweeping eye beam attack: it will move across the room in one direction, then after a second, it will return in the other direction. Pay attention to the boss again and prepare for the second dash opposite the first. You still want to go through the beam or dash the beam.

Phrike can also reverse the combination of purple bullets and blue rockets. It will now shoot purple bullets downward, moving through the ground in a spiral fashion and launching rockets into the air at the same time. Rockets are still the top priority because they are fast, but you have to pay attention to their position of movement on the ground. Purple bullets are spacious but numerous so you can slip through them, but be careful not to get distracted and catch one.

Keep your head on a swivel, avoid feeling overwhelmed and you can take down Phrike with sustained fire. It doesn’t need a lot of damage, but you should pay special attention to his melee attacks, due to the time delay, the second can be annoying.