How to Get the Huckleberry Catalyst in Destiny 2 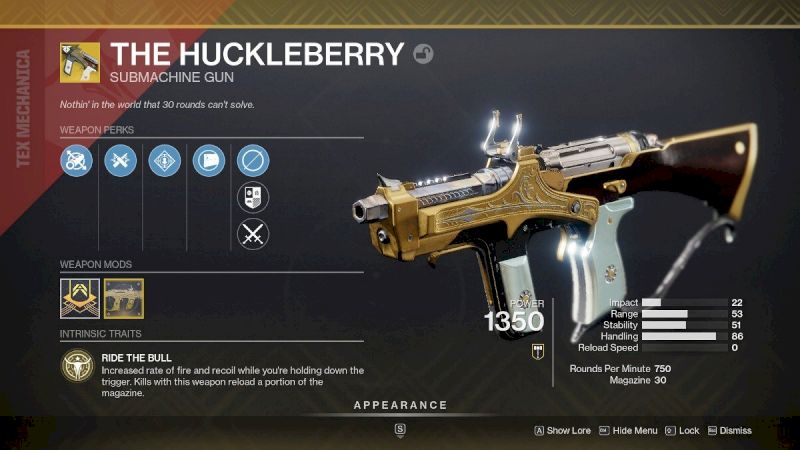 The Huckleberry is one of the most slept-on weapons in all of Destiny 2. That’s why I’m showing you how to get the Huckleberry catalyst. It turns the SMG from a mediocre exotic to one of the best AD-clear weapons in the entire game, so it’s worth getting.

I know what you’re thinking, and no, I’m not crazy. I genuinely believe that the Huckleberry, with its catalyst, is one of the best and most underrated weapons in Destiny 2 today. I’ve been playing since D1’s beta, too, so that’s nothing if not an informed opinion.

I’m going to run you through how to get the Huckleberry catalyst in Destiny 2 so that you can hopefully try the weapon out for yourself.

How you get the Huckleberry catalyst in Destiny 2 is very much the same as every other regular catalyst in the game – good ol’ fashioned grinding.

The Huckleberry catalyst is a potential reward drop from playlist activities – Gambit, Crucible, Vanguard Strikes. Once you’ve unlocked the Huckleberry in your collections, each match or Strike completion has a chance to award it.

The drop rate is pretty poor, though. You could be grinding for hours without a single sign of a Huckleberry catalyst drop. You’re truly at the mercy of RNG here.

It does drop, though, albeit eventually. So, all you have to do is play. Stock up on some bounties, throw on some music and get ready for what could be a several-hour-long grinding session.

If you want to optimize your grinding, grab some like-minded friends and speedrun through Strikes. A lot of the Strikes on rotation from the playlist can be completed within 5-10 minutes with a full fireteam. Doing this will save you a lot of hassle and headache – trust me.

What Does the Huckleberry Catalyst do in Destiny 2?

The Huckleberry catalyst is actually one of the stronger catalysts in all of Destiny 2 in terms of its effect versus the weapon’s base functionality. Rather than simply adding stats onto the gun like so many other catalysts do, it changes the way Huckleberry’s exotic perk works.

That perk, Ride the Bull, increases your rate of fire and recoil as you hold down the trigger. It also causes kills to refill a part of the gun’s 30-round magazine. With the catalyst, each kill refills the entire magazine rather than just a portion of it. This effectively enables the weapon to fire infinitely, provided there’s an enemy on the receiving end of your hail of bullets.

Granted, you’ll need to kill 500 enemies with the catalyst equipped to activate it, but that’s short work for anyone using the Shuro Chi thrall farm.

Once you’ve got the Huckleberry’s catalyst online, you’ll realize just how underappreciated the weapon is. You can take it into anything from raids to Master Lost Sectors. The only activities I would avoid with it are PvP matches and Grandmaster Strikes. Everything else is fair game.

Huckleberry makes short work of red-bar enemies, and its near 100% uptime means you’ll spend more time shooting and less time reloading. Give it a whirl and you’ll see that I’m not just talking nonsense – it really is one of the best primaries in all of Destiny 2.

Related: Who is Rat in Destiny 2?