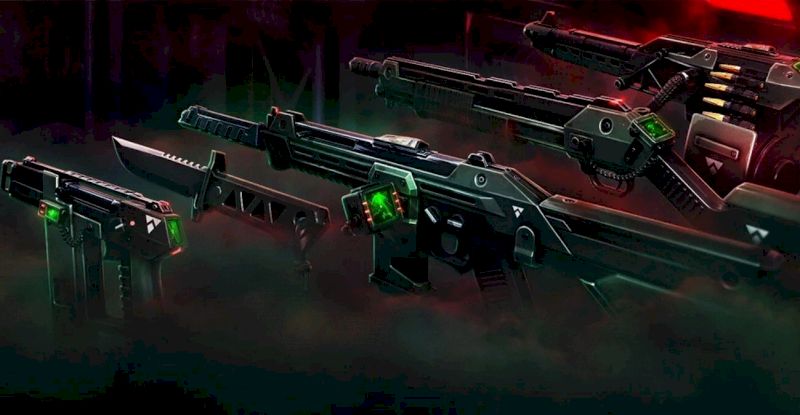 The Xenohunter VALORANT bundle has been released, and reactions are… mixed. The Alien-inspired skin bundle’s unique selling point is the fact that it has the first iteration of a VALORANT heartbeat sensor. Not a functional one, obviously. Don’t worry about that – it’s purely for cosmetics.

The heartbeat sensor is a nice touch, but the rest of each skin is a bit bland in comparison. The muted colors that the Xenohunter bundle uses are reminiscent of the default skins, and that works to its detriment. At 7,100, it’s not the most expensive bundle to be released, but that’s still $70 bucks you’ll be spending.

I’m going to run you through each of the skins and weigh in on what I think of each. My word is far from law, though, so take my opinions with a pinch of salt. If you like the skins, buy them! Don’t let me stop you. Here are all of VALORANT’s most recently released skins.

The Xenohunter Phantom is easily the best-looking actual weapon skin. Its heartbeat sensor is more traditional than the other weapons, and combined with the suppressor is almost reminiscent of the ACR from Modern Warfare 2 back in the day.

For 1,775 points, I don’t think you can really go wrong with it. It’s up there with the Recon, and at that price point, it over-delivers on quality.

This might be a hot take, but I really like the Xenohunter VALORANT knife. The community is down on it because it looks like a fancy version of the default knife. That’s a fair criticism, but it’s not the whole picture. Just because the Xenohunter Knife isn’t some fantasy great-sword doesn’t mean it’s a bad skin, especially when you see the animations.

It has the right-click animation that was used for the default knife back in the VALORANT BETA, and that’s something a lot of players have wanted back for a while. Combine that with some fancy inspect animations and you’ve got the makings of a really good skin.

Out of the entire Xenohunter VALORANT bundle, the knife is the only thing I plan on buying. At 3,550 points, though, it’s a bit steep. If you were going to buy the knife and Phantom, for example, you would be better off springing the extra $10-ish bucks for the entire bundle.

There’s not too much to say about the Xenohunter Frenzy. It’s a small weapon so it’s not as detailed as the others in the bundle. Its VALORANT heartbeat sensor is on the top back of the grip, like the Bucky and Odin, but its size makes it hard to properly admire.

The Xenohunter Frenzy is pretty weak, both as a part of this bundle and compared to other Frenzy skins. It almost looks like it’s from the Infantry collection, and that’s not a good thing.

The Bucky, in my eyes, is in the same camp as the Xenohunter Frenzy. It’s a phoned-in design that doesn’t look nearly as good as the Phantom, again with a VALORANT heartbeat sensor on the back of the weapon rather than off to the side.

It suffers from the same problem as the rest of the Xenohunter bundle, which is that it looks just a little bit too much like the default Bucky. The muted colors and realistic, almost tactical design of the skin just doesn’t stand out. Some people like that, though. The Recon Phantom is incredibly popular, after all.

Last but not least, the Xenohunter Odin. I actually think this skin is particularly strong-looking. Its bulkier design means that more of the detail can shine through, and for the Xenohunter skins, in particular, I think that’s really helpful.

Given that the Xenohunter bundle is clearly inspired by Alien, I think the Odin works really well. It wouldn’t be out of place in an Aliens movie, something that I can’t say for the other skins in the bundle.

Overall, I think the Xenohunter bundle isn’t a must-buy. We’re still coming off of the RGX Pro 2 bundle, so all of our wallets are probably still dealing with that. If you were determined to buy this bundle, though, I don’t think anyone could hold it against you. They’re good-looking skins for the price, and the animations on the knife are stunning.