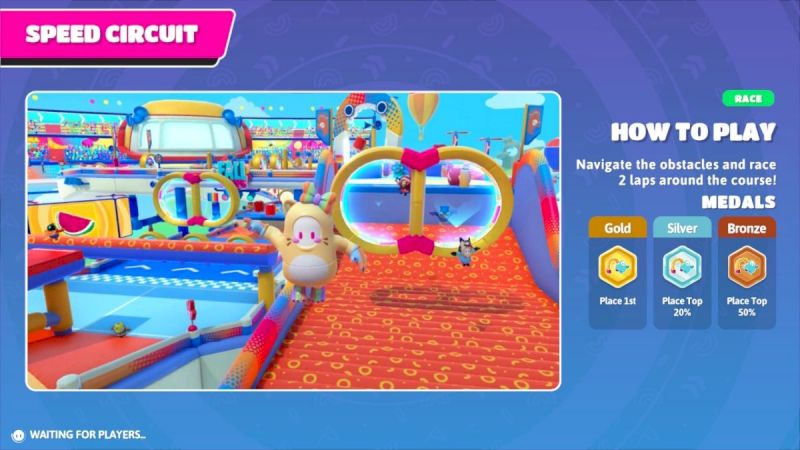 One of the brand-new Rounds that made its way into the rotation for the new season of the battle royale spectacular Fall Guys, is an interesting one compared to what the game has done in its past. Titled Speed Circuit, this new course has a strong focus on speed alone.

Though obstacles still make their presence known, Speed Circuit seems more like a Mario Kart track than a typical Fall Guys course. We’ll explain the best way to qualify on Speed Circuit in Fall Guys, ensuring that you make it to the next Round, easy peasy.

Going over a brief rundown of how Speed Circtui is laid out; it’s a winding course that has a bit of verticality here and there with various spinning obstacles set in your way. There are a lot of rotating bars and bumpers that try to stop you as you get through the 2 laps required to finish. Their addition to this Round is perfectly done because your main goal is to go as fast as you can, so their being there is the perfect Kryptonite to your Superman.

How speed is tied into this mode is through the speed rings placed throughout the course. These can be levitating, making it tempting for a player to try and jump into one, but it’s the stationary ones on the floor that’ll serve you the best. Creating a clear route and sticking to it is your friend, even if more obstacles are added with every lap.

Getting to that strategy the best way to qualify; follow the course but take its detours located on the left-hand side, marked with a red path. Not only do these divert you away from the dangers of the main course, ie, obstacles and even other players but you also have a few more easily reachable speed rings to push you forward. Sure, there are a couple of obstacles and some players in these detours too, but the risk-to-reward balance is way better in this case.

Another layer that goes with this strategy is to play it safe for the duration of this course. Even though it looks complex, it’s actually a lot more mundane when it’s boiled down. This mistaken complexity is what catches out the players overthinking it. Just do your best to avoid obstacles and you’ll do fine. The Fall Guys are actually pretty easy to handle even with the speed boost that the speed rings give them too.

This strategy is simple but effective. That’s the best way to qualify on Speed Circuit in Fall Guys. We’ve also recently covered how you can qualify for the Speed Circuit course by going backward, but that requires a more nuanced approach.

Related: All Fall Guys Changes on Free to Play Release