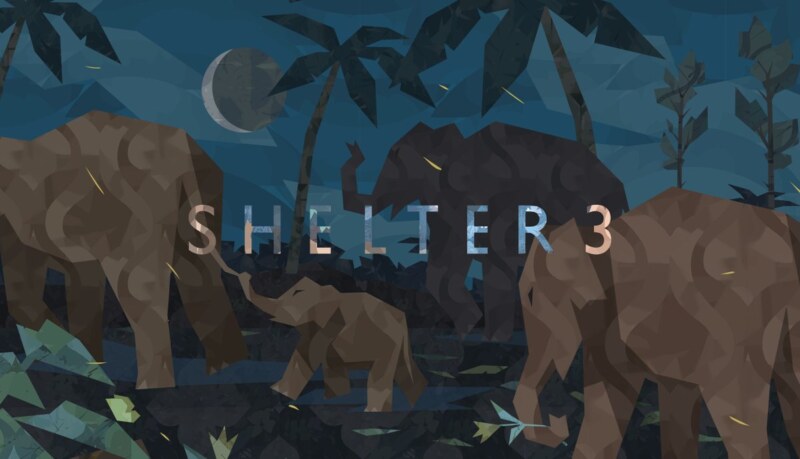 Shelter 3 is a game where wisdom, empathy and leadership play an important role in your survival. As a new mother you must protect your calf, but you must also take responsibility for the whole herd, protecting old and young from lurking predators and the threat of starvation. What’s more, the matriarch has given you the responsibility of steering the herd to an important destination and difficult choices will need to be made on the way.

Help the matriarch by choosing the best route to keep your herd well fed and safe from harm. In this guiding role you’ll use ancient knowledge to navigate, gaining wisdom as you do so. As an elephant you’re not a predator but prey, so you’ll need to steer clear of beasts in the bushes at the same time as avoiding starvation. With so many mouths to feed, the journey will not be an easy one, but elephant empathy has advantages and you’ll be able to quickly gather your herd close at times of great danger. Your journey will be scattered with special moments as you discover new terrain and untrodden pathways, but grief will also play its part.

A Different Kind of Animal

Like its forebears, Shelter 3 invites you to inhabit the spirit of an animal. But where Shelter 2 centred on a lone lynx family, Shelter 3 lets players explore a different kind of animal existence, where community is as important as family, and unity is key. Landscapes and fauna are rendered in mesmerising patterns and scored with an enchanting soundtrack by Retro Family, conjuring a magical world to lose yourself in. From lynx cubs to elephant families, from the tundra to the jungle, the next Shelter incarnation migrates to new territory, evolving into a new, magical game world and an experience that you won’t forget.

Shelter 3’s environment may be pretty, but it’s not enough to forgive a game that ultimately feels unfinished.

Overall, yes, it’s story is fine. I get what they tried to do with it. But it’s not worth the price at all. It’s not as emotional as the previous games. It doesn’t have mechanics that keep me hooked like the second. It’s short, and parts of it honestly come across as lazy.

Shelter 3 is a good game for fans of relaxing puzzles. However, those who have enjoyed the challenge and high risk of past Shelter games may find the change in mechanics frustrating.