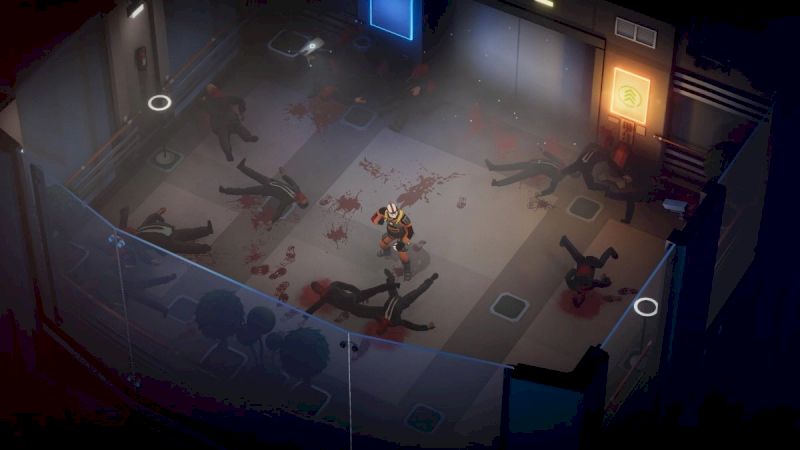 Humble Games and Jacob Dzwinel’s beat ’em up, Midnight Fight Express has been a title that was on my radar for a while. With its hectic gameplay, fantastic art style, and isometric viewpoint, there seemed to be a lot to like about this game just from the first few trailers. Having now played the game for a week now, those things that caught my attention have fully made me fall in love with the game.

Midnight Fight Express is a simple yet totally explosive game that gives players everything they need to become the ultimate killing machine. In a world filled with near-endless enemies that want to kill you, there is always something new for you to use in order to cut down your hostiles. If you wanted to be John Wick, then this is the only game that truly allows you to feel like him.

When it came to Midnight Fight Express prior to me having played it, I was under the assumption that it would, like other games similar to it, follow the growing trend of being a roguelike. Its gameplay would be greatly suited for it, and it would really do a great job at succeeding in that genre overall. Though, that isn’t the case here. Luckily, for players like myself who struggle with the enjoyment of a lot of roguelikes, Midnight Fight Express is actually a lot more accessible as it’s a good old-fashioned beat ’em up.

The formula here works perfectly and makes the gameplay feel perfectly balanced as dying won’t send you to the beginning though the game can be extremely difficult when it wants to be. Every level is a bite-sized offering that makes gameplay flow nicely and never seems to overstay its welcome. It’s also constantly adding new elements which means each and every level has something new to add to the fray. There’s never a dull moment here.

Midnight Fight Express also offers a ton of replayability for players through various challenges for each level with things to collect within them, and even different difficulties to play them on. Though the game can be completed in about 4 hours, there is going to be so much more to do once you finish. Midnight Fight Express has hours worth of fun left within its bones far after the credits roll.

Combat That Never Gets Old

Similar to the movies it takes inspiration from, Midnight Fight Express never gets old because of the action that’s woven into the fabric of its being. Combat itself whether using hand-to-hand, melee weapons, or firearms never tires its flair. Each feels organic and unique to each other though all have its appropriate uses that make them feel invaluable in a tight situation.

There are dozens upon dozens of different weapons that players are able to pick up over the duration of Midnight Fight Express, to the point where you’ll actually be surprised at just how many were baked into this game. It’s kind of astounding, to be honest. Jacob Dzwinel did such a great job at making the combat feel really good. It’s just as finely crafted as what you’d see in an Arkham game or Sifu. It’s rewarding yet meticulous.

And of course, like any good beat ’em up, there are various bosses that you’ll need to fight in-game to get you further through it. I found the bosses to be really fun to fight and never hard enough to the point that I felt like I wanted to stop playing. Each one has its own unique fighting style and weapons, though can be exploited once you find their weak spots or you have a great weapon at your disposal otherwise.

In addition to the perfected person-to-person combat and dozens of weapons, Midnight Fight Express also includes other forms of combat that keep the game feeling like a moving train (pun intended). There are many times when you’ll have to fight against enemy vehicles to keep you alive. There are enemy attack helicopters and machine gunners in box trucks, just to name a few. It’s moments like this that really make you feel like you’re in a 007 film, as they’re huge set pieces.

Midnight Fight Express really allows players to create their own unique fighter. You have customization options that give you the chance to change your character visually, as well as Skills to unlock and equip to your character to make them the kind of fighter you want them to be.

Skills really come in handy during gameplay as they will give you a leg up on your enemies by unlocking new move sets and abilities. You can equip or unequip them at any time too which is great for making things the way you want. In addition, there’s also a Playground mode that lets you take these Skills and apply them in a training situation with various weapons and enemies to use at your disposal.

At the end of the day, there’s no denying that Midnight Fight Express is an extraordinary fighting game with an extremely satisfying gameplay loop. Because of its bite-sized levels and load of replayability possibilities, there’s never a reason to put this game down. This is definitely one of my favorite games of 2022. There are virtually no negatives going for it and it’s just a romp all the way through.

If you’re someone who loves the John Wick films or any action film of the last 30 years, then this is the purest way to actually get to pretend you’re one of those action heroes. Its combat is calculated, there are almost endless weapons to wield, and a ton of hardened enemies to use them against. Because of the fact that it bucked the roguelike trend, this game feels more alive than it could otherwise.

Midnight Fight Express is available now on Xbox One, Xbox Series X|S, Xbox Cloud Gaming, PlayStation 4, PlayStation 5, and PC, with an eventual release on Nintendo Switch in the future.

For more on Midnight Fight Express, be sure to check out our various guides as well as additional coverage on the game, here on Gamer Journalist.