Review: I Was a Teenage Exocolonist is an Otherworldly Experience 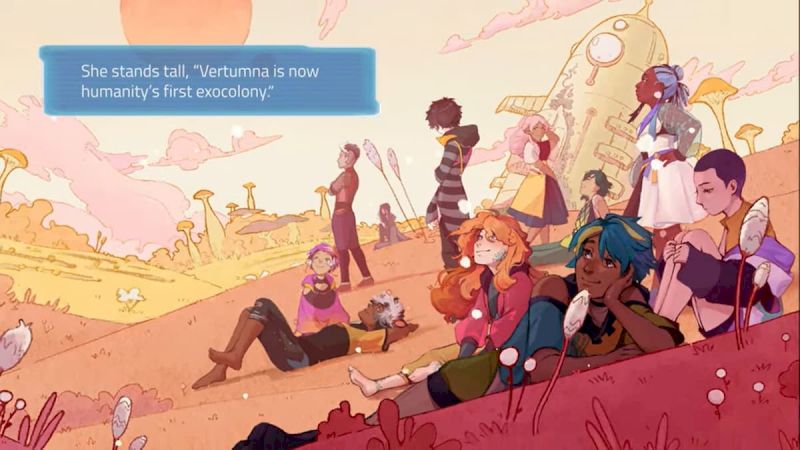 There are not enough words in any language to accurately describe the genius behind I Was a Teenage Exocolonist, but not making an effort regardless of that fact would only do this heart-wrenching game a disservice. This game is overflowing with rich, real-life situations and true-to-life experiences, it’s easy to forget that you’re a genetically modified teenager cavorting with aliens on a planet trillions of lightyears away from Earth!

The best kind of game is a game that makes you think, and I Was a Teenage Exocolonist gives you a lot to think about. You will be thinking of this game months and years down the line after playing it, guaranteed. This game is constantly forcing you into situations that leave you feeling morally unclean, even if you ended up doing the “right” thing in the end. Some situations in life just have no right answers, and this game depicts that depressing feature of life beautifully, if not morbidly. I Was a Teenage Exocolonist is the sci-fi coming-of-age game of your dreams; you have never played a game like this before.

This game is, quite literally, endlessly replayable. This game’s entire plot is based on its replayability; your character remembers every past playthrough (their “past lives”) that you’ve ever completed in the game. This is an incredibly unique feature that is rarely, if ever, seen in other video games.

This would have been a great game even if it didn’t have all the romance, but it’s definitely an amazing game with it. This game has more romance options than most dating sims, with ten available suitors! There are male options, female options, nonbinary options, and even alien options for romance! You don’t have to date anyone in the game if you don’t want to, it’s not integral to the story or anything, but it’s a nice feature for those who like a dash of romantic spice in their games.

Even though the romance is completely optional, the developers of I Was a Teenage Exocolonist did not skimp out on the romantic storylines. No matter who you decide to date in this game, you will be blown away by how much detail and thought was put into the romance. Your interactions with your in-game lover can range from hilarious and excited, to tragic and betrayed; even the romance is entirely unique in this game!

This game is great at throwing you into ethically ambiguous situations and forcing you to make a judgment call. Even if you think you’re picking the “right” choices in these tough situations, you still walk away feeling morally unclean. The entire premise of this game is based on humanity’s relationship with the preexisting alien life on Vertumna; whether you decide to live harmoniously with nature, or wage war on it, is up to you. But this game definitely solidifies the idea that peace cannot always be won with violence, and taking a gentle approach to tough situations is not always a sign of weakness, it is often a sign of tremendous strength and maturity.

Although this game is fantastic about keeping a light atmosphere in most situations, it has the potential to get dark fast. This game has a laundry list of content warnings that should definitely be heeded; if you’re easily put off by games that deal with serious subjects, this game may not be for you. This game deals with politics, violence, environmental destruction, power imbalances, animal abuse, domestic abuse, and many other dark and serious subjects.

Although this game does get serious, it should be noted that the game isn’t serious all of the time. Humor and happiness are always right around the corner in I Was a Teenage Exocolonist, so don’t worry about getting too depressed while playing. You’re also, thankfully, in charge of your own fate in this game; if you want a good ending, all you have to do is pick the “good” choices (easier said than done, I know, but as long as you continuously pick kind and empathetic choices, you shouldn’t worry too much about getting a bad ending). Kindness is definitely rewarded in this game; this game can get dark, yes, but you’re in full control of how dark it gets.

Bravely Go Where No Teenager Has Ever Gone Before

Although I Was a Teenage Exocolonist isn’t an open-world game, there are still numerous opportunities to explore. You can explore ancient alien dwellings and marvel at their prehistoric machinery, forage for edible plants among carnivorous foliage, or simply marvel at the stunning beauty that the plains of Vertumna have to offer. You’ll never run out of sights to see on Vertumna!

You can find many items on your adventurous escapades outside of the colony, such as collectibles, food for your colony, or even pets! This game allows you to tame and keep numerous creatures, such as Hopeyes, Vrikis, and Unisaurs. These sweet little creatures, once tamed, will follow you around and become your companions for the rest of the game. If their adorable companionship wasn’t enough, pets can even give you power boosts in the game, so make sure to always be leveling up your Animals stat (the higher your Animals stat is, the more pets you will be able to tame)!

If you get anything out of this I Was a Teenage Exocolonist review, let it be that this game is worth every penny. This game will make you laugh, cry, scream, and everything in between! If you need a game that will make you think, feel, cry, and laugh like you never have before, you definitely need to add this game to your collection.

Will you protect your colony against the aggressive beasts that populate the alien planet, or will you learn to live harmoniously with nature? Will you protect your colony, full of everyone you’ve ever known and loved, or will you protect the rapidly degrading habitat that must pay the price for your abrupt colonization? Or will you choose to do neither, and live peacefully while all of the big decision-making is left to those already in power? The choice is entirely yours in I Was a Teenage Exocolonist; every choice you make matters, and every choice that matters is yours to make!