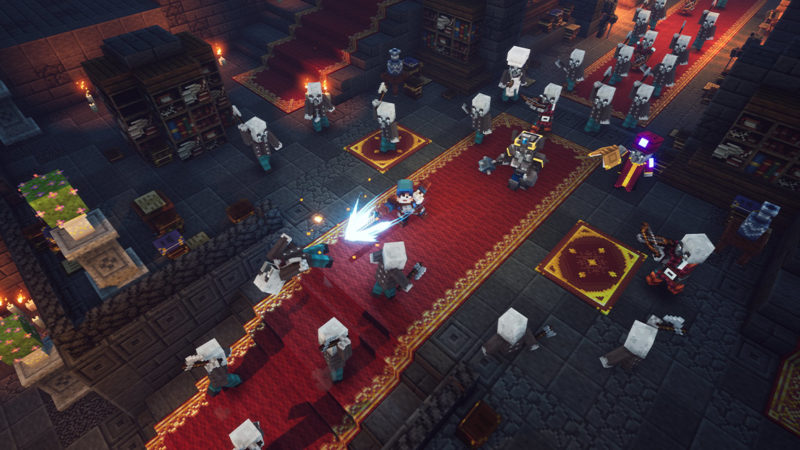 Minecraft Dungeons uses a non-linear approach, allowing players to play in the order they choose. In other words, other levels must be completed before the fiery forge and desert temple can be unlocked. In this way, the time the player arrives at Fiery Forge is likely to reach a well leveled and well-equipped state.

This will work to your advantage, because Minecraft Dungeons Fiery Forge is home to one of its toughest bosses, Redstone Monstrosity. This beast will definitely attract players to compete for its emeralds, and it may take a few attempts to put it down. Fortunately, there are some techniques that can make defeating him much easier.

The boss himself is visually reminiscent of the redstone golem like the boss in the previous area, but the behavior of the two enemies is quite different. Therefore, the player must take a different approach against the boss and should carefully study his actions.

Redstone Monstrosity have three main attack methods. The first attack was a simple ground strike, hitting all players in the area near the impact point. The boss telegraphs this move heavily, so it should be easy to observe and avoid. Then, the Redstone Monstrosity can summon the magma cube as an enemy (which means that soul builds work well for this boss), causing damage to the player.

These are not particularly dangerous, but in large groups, they can quickly drain health and prevent players from moving. When Redstone Monstrosity digs his fist into the ground, this move can be recognized. This is also the only time when close combat is relatively safe.

Finally, the boss can also launch a series of explosive projectiles, which will cause damage in AoE and toss players around. It is difficult to avoid this kind of attack, but it can be avoided with Boots of Swiftness or blocked with the Totem of Protection. In addition, players can also cause damage to redstone monsters in a variety of ways. The melee attack is best used when the beast summons allies. The long-range attack works well, but it is limited by the amount of ammunition the player has.

The best way to cause damage to this leader and ultimately defeat him is to use the pillars found throughout the map. At the beginning of the level, the player have overloaded similar pillars, causing the flame to explode in four directions from them. If the player uses pillars, the same situation will happen here, and these flame pillars will cause a lot of damage to the boss. Avoiding his attacks, luring him into the explosion radius and blowing up the columns is the best way to bring down the boss.