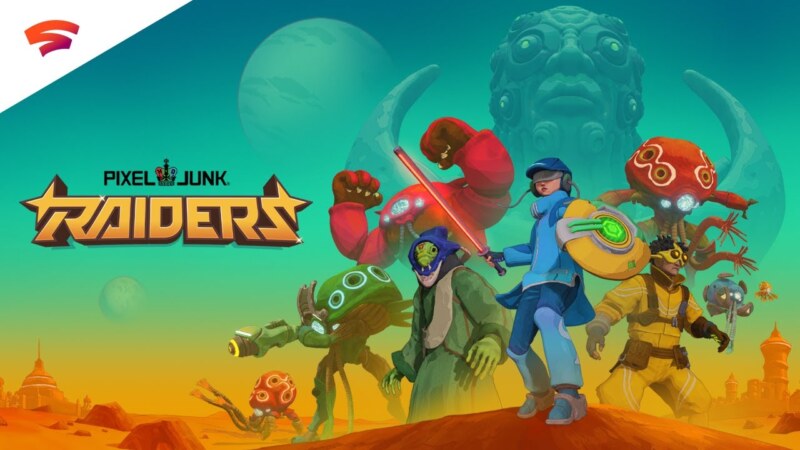 PIXELJUNK RAIDERS is a science fiction action game set on the distant planet of Tantal, whose peaceful inhabitants go about their days trading and living in harmony with each other. Unfortunately for them, their planet is invaded by mysterious creatures known only as the Anomaly, causing chaos and forcing the survivors to run for their lives. Without any hope of countering these marauders, the Tantallians send out a distress signal, which is picked up by the United Planets, a confederation of worlds in a nearby solar system.

The United Planets, in turn, send an alert to any and all mercenaries in their territory to help in the rescue of the aliens, while also turning a blind eye to the looting of any relics found in the process. Players take on the role of one of the mercenaries interested in a contract on the world, inputting coordinates to land in areas where aliens need help. They’ll have to search the surrounding area for survivors and gather resources to build turrets or other tools they might need. They can choose to follow in the footsteps of mercenaries that have landed in that location before, retracing their steps by using resources to perform the same actions made by other explorers, such as summoning minions or placing mines. This feature takes advantage of the Stadia State Share feature, which lets players pass content between themselves via screenshots and links to potentially clear difficult areas. Players will also be able to collect items from fallen enemies or chests they come across.

When all of the survivors in a location are rescued, the Anomaly’s hold on that area is broken, and a ship commanding those troops falls from the sky. Rescue enough aliens, and you’ll be able to return to your ship to receive a number of rewards, such as DNA that can be spliced into your character for skill and stat boosts, as well as patches that can strengthen your avatar. Will you be able to help the Tantallians free their world, or will you run for the hills after collecting as much money as you can?

PixelJunk Raiders may look like an inventive and colorful world to wander around, but it stumbles hard when it comes to darn near everything else that makes a roguelike fun.

PixelJunk Raiders is just a few steps away from something I could like. It grabs something that could be good and just makes it feel a little alien.

PixelJunk Raiders is the latest Stadia exclusive to introduce some cool features built for the platform, but its alien world leaves too much to be desired.