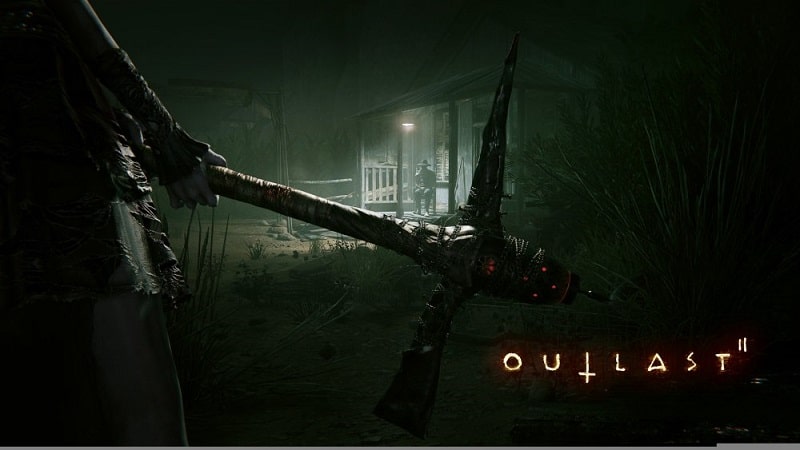 Outlast 2 is a first-person survival horror game that, like its predecessors Outlast and Outlast: Whistleblower, is a single-player campaign. It is set in Northern Arizona. The game continues the found footage characteristics from the first game. The player controls the investigative journalist Blake Langermann, who investigates a dilapidated rural area in Supai,near the western edge of the Colorado Plateau.

Langermann cannot fight except in scripted scenes, but must run and hide from the numerous hostile members of Temple Gate. The player can crouch, run, jump, walk, vault, slide and climb much like the first game and can hide in lockers, barrels, wardrobes, beds, pools of water, tall grass, cornfields, and inside of houses. He has a limited stamina meter and the player must manage how long he runs, lest he becomes exhausted and move more slowly.

Langermann possesses only a camcorder, which has night vision capabilities, though the camcorder’s batteries are also drained when night vision is used. Compared to the first game, Langermann’s status as a cameraman means he carries a more advanced camera, one with clearer footage, zoom, and a sensitive microphone that can be used to detect distant footsteps and other noises. The player is equipped with an inventory system displaying the amount of footage recorded on the camera and the items they are carrying. Spare batteries suitable for the camcorder and medkits to heal are spread throughout the game.

Outlast 2 is a terrifying successor to the 2013 original that keeps the scares coming at a relentless pace.

Horrific in completely the wrong way, Outlast 2 is a night-vision journey into frustration. An intriguing story just can’t save the infuriating misery that awaits.

Stealth and pursuit haven’t changed much in Outlast 2, but it excels as a beautiful, brutal journey through extreme spiritual anxieties.