How to Level Up in Midnight Fight Express 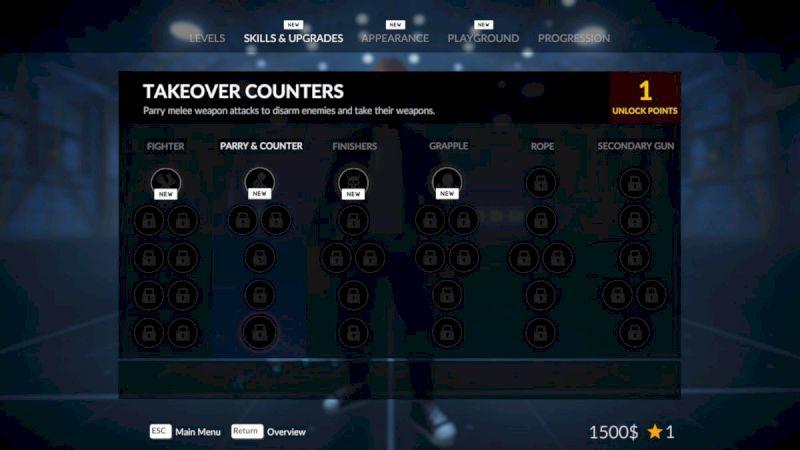 When it comes to leveling up your character in Midnight Fight Express, there’s not so much an actual level or rank, but Skills that you can unlock to strengthen your character as the game goes on. Skill points will be awarded to you at various points during the game for completing levels and getting a good grade on them, completing challenges, and things like that.

There are a total of 40 Skills that can be unlocked over the course of the game, each falling into a specific category with its own skill tree. The categories are Fighter, Parry & Counter, Finishers, Grapple, Rope, and Secondary Gun. Each tree offers skills to unlock that fall in line with the title of each one.

As you play and unlock the skills, you can equip and even unequip them as you please. If you’re struggling with getting the hang of specific Skills, you can take a chance to train with them via the Playground mode available within the game.

In Playground mode, you’ll be able to set up your own custom training sessions where you can take not only Skills but weapons as well to spar with against dummies. You can even tune these dummies to match the skill and strength of the more ruthless in-game enemies if you really want to put things into action.

From personal experience, when it comes to choosing Skills early on, try to experiment with what the game gives you. These Skills can be unequipped so don’t worry about being put into a box on what your character’s build is going to be. Have fun with all of them and see which ones stick the best for you.

That’s all there is to know about how to level up in Midnight Fight Express. Take what you learned and fight on!

Related: How to Customize Your Character in Midnight Fight Express