How to get Scars in Sea of Thieves 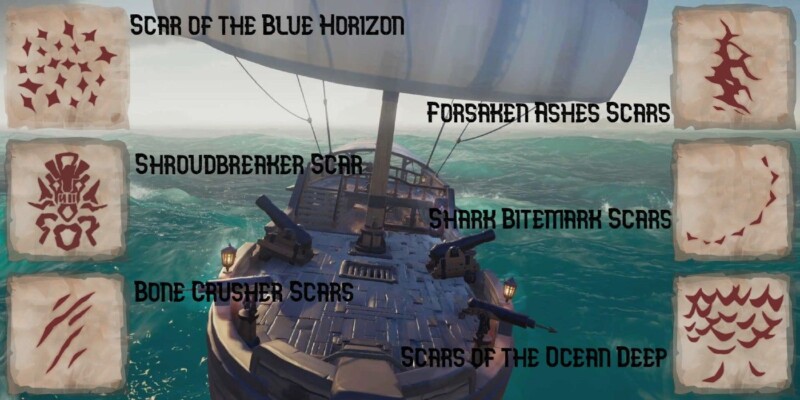 “Sea of ​​Thieves” players who want to bring their characters to life can turn to Vanity chest. This box contains beards, hair, hooks, tattoos, and even the rarest items in the game, such as curses and scars. Although these Vanity chests are easy to find in the Sea of ​​Thieves, fashion items like scars may be difficult to unlock.

Vanity chests appears on the ship, as well as in front of the general clothing store where the outpost and Athena’s Fortune Hideout. Currently, the player have access to six scars. This list includes the Scar of the Blue Horizon, Scars of the Ocean Deep, Shroudbreaker Scar, Bone Crusher Scars, Forsaken Ashes Scars, and Shark Bitemark Scars. Unfortunately, for players in Sea of ​​Thieves, most of these scars are only open for a limited time.

“Sea of ​​Thieves” has seasons of different content, where players can accept new challenges and get new rewards. Therefore, some of these scars are only available during these content seasons. This makes the Blue Horizon Scar and the Forgotten Ash Scar the only open options for players who have recently joined the Sea of ​​Thieves.

The aforementioned scars are now available as part of the third season of the game, which begins on June 22. For interested players, this update may remain open for approximately 12 weeks, and this scar will be available for purchase by players with a Renown level of 100.

There are many ways to gain prestige in “Sea of ​​Thieves”, which provides players with an excellent opportunity to achieve this goal. Reputation is gained passively by visiting islands, killing skeletons and collecting treasures, or more actively through trials. Trials are specific tasks that players can perform during the season of content to earn more Renown.

The Forsaken Ashes Scar requires players to obtain the Master Devil’s Voyager commendation in the game. This recognition of the Sea of ​​Thieves requires players to complete 5 Devil’s Roar Voyages, one of which is the Gold Hoarders and Order of Souls. After successfully completing these tasks, it should be possible to purchase the Forsaken Ashes Clothing, Vanity, and Equipment sets.

To unlock Shroudbreaker’s Scars and Scars of the Ocean Deep in Sea of ​​Thieves, players must have played Season 1 and Season 2 respectively. Shroudbreaker Scar can be won at the end of January this year. The second scar is available from April to June 22 this year. In both cases, players must reach reputation level 100 within the season to get the corresponding scar.

Other scars that were available to players but later disappeared include Bone Crusher Scars, the Forsaken Ashes Scars, and the Shark Bitemark Scars. These three scars appeared in 2018 when the Cursed Sails and Hungering Deep content updates to Sea of Thieves. Players who completed specific challenges/events during these updates can purchase each of them.