How to Beat The Rat King in Midnight Fight Express 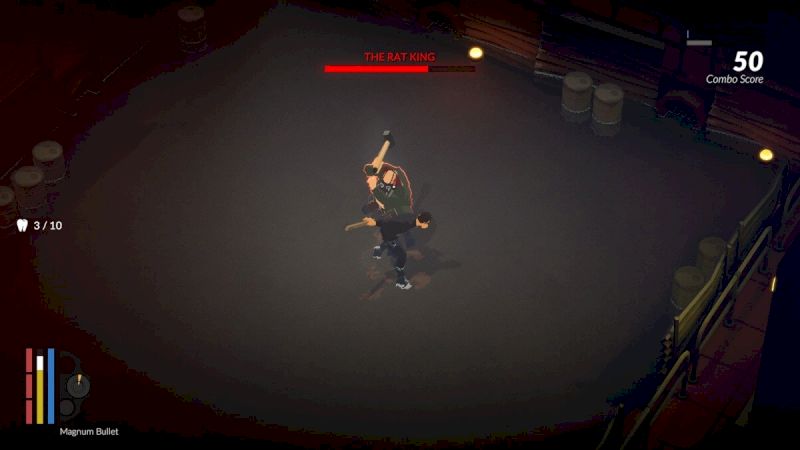 If there’s something that Midnight Fight Express consistently delivers on, it’s the bombastic, over-the-top action sequences that players will find themselves in. With fierce enemies to battle alongside tightly crafted combat mechanics, this is an action fan’s paradise for sure.

Players can expect 40 levels to play through, many bosses to defeat, and 120 challenges to complete, so there’s a lot to get done during their time with Midnight Fight Express. Early on, players will go toe-to-toe with a sewer-dwelling boss named, The Rat King. Today, we’ll explain how to kill him as well as how you can complete his specific challenge as well.

How to Beat The Rat King in Midnight Fight Express

When it comes to your battle with The Rat King, he’s definitely a more formidable foe than the previous boss, Lil’ Tony. He has specific patterns that he uses in order to maneuver that large sledgehammer of his. He has a jump attack that has him strike down heavily, a spinning move that unleashes many hits, as well as a standard attack that he uses at a fast pace in order to bombard you with a flurry of hits.

For him, it’s best to dodge in and out, attacking at optimal times between his attacks. It’s also a good tactic to hit him and his minions with the trashcans located in the mini arena that you fight him in. His minions come in handy as they hold quite a few melee weapons which you can use against The Rat King once you get rid of them.

If you’re looking to get his challenge done, you’re going to need to kill everyone within a 45-second period of the fight beginning. I found it a good idea to start by tossing the trashcans on the left side of the arena at The Rat King to stun him a bit, then go directly for his minions.

Similar to fighting The Rat King himself, it’s good to just be fluid, dodging and rolling between enemies, getting hits in as you can. Take out the minions first, then use their weapons and any remaining trashcans to take down The Rat King last. It isn’t a challenge that’s too difficult, though it heavily relies on how well you can move between enemies and counter their attacks in order to complete it.

That’s all you need to know about beating The Rat King in Midnight Fight Express as well as completing his challenge.