How to Beat the Howling Aces in Cuphead: The Delicious Last Course 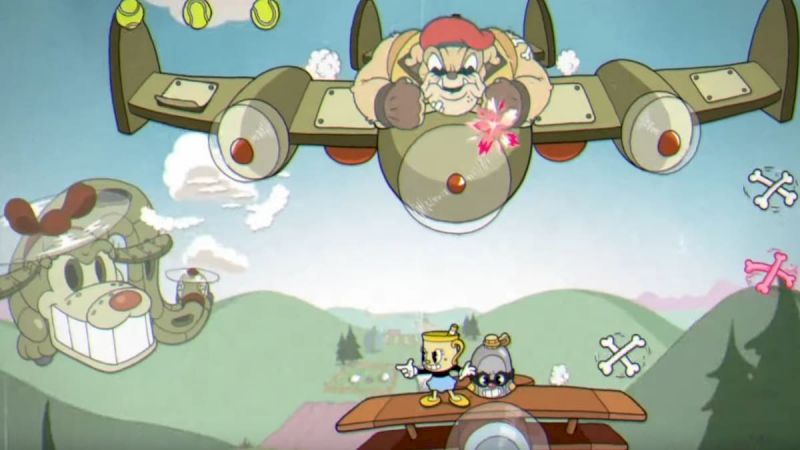 Why is aerial combat referred to as “dogfighting?” Dogs don’t fly, that’s just silly. I mean, not in real life anyway. In cartoons, and by extension Cuphead, they do quite a bit of flying, probably due precisely to that name. Speaking of which, here’s how to beat the Howling Aces in Cuphead: The Delicious Last Course.

How to Beat the Howling Aces in Cuphead: The Delicious Last Course

The Howling Aces are a three-phase fight with a highly unusual stage layout. Rather than a flat surface or multiple platforms, your lone foothold is a biplane piloted by our good friend Canteen Hughes. As you walk left and right, Hughes will do his best to lean the plane along with you, but if you walk too far too fast, you can fall off.

Due to your lack of safe areas, you should employ weapons you don’t need to get too close to use. Tracking weapons like the Crackshot and Chaser are good here, and the upward arc of the Twist-Up could also prove useful. For characters, use Cuphead or Mugman here, as their jumping parry works better with the general verticality of the fight.

Phase 1: Bulldog of the Skies

To start things off, the Bulldog will fly in on his bomber plane, maintaining a position near the top of the screen. Puppies will pop out of the flaps on the wings to launch bunches of tennis balls at you, and the giant helicopter dog will launch homing fire hydrants from the background.

Meanwhile, the Bulldog will hop out of his seat for one of two attacks. If he floats down from the top of the screen, he’ll launch three boomerang crossbones from his shoulder tattoo. One or two of these can be parryable, but just make sure you don’t forget about them when they swing back in the other direction. If he pops out from the side of the screen, he’ll pull out a cat, which spits out three balls of yarn. You can just duck under these.

Related: How to Beat Glumstone the Giant in Cuphead: The Delicious Last Course

When the plane crashes, the four puppies will take up formation in a circle around your plane, launching small projectiles. They’re small and quick, so they might be a little hard to hit with regular weapons, but if you’re using a tracking weapon, just fire and forget while you avoid the projectiles. If you happen to have a super available at the start of this phase, you can use it as soon as the puppies fly in to dispatch one or two of them quickly.

Phase 3: Get Eaten by the Choppa

With the puppies downed, the giant helicopter dog will swoop in and grab both sides of the screen with its paws. Lasers will pop out of the paws, telegraphing their shots with faint lines, so just make sure you’re not standing where they’re pointing. There will be three laser shots in sequence, some with two lasers at once, and some with a pair of pink lasers at ground level that you can parry.

When the lasers are done, the helicopter with turn the entire screen 90 degrees, then bring you up close to the mouth, where the pilot pops out. She’ll start launching dog bowls at you, with red bowls aiming for your feet and yellow bowls moving over you. These aren’t that hard to avoid, so just start unloading on the pilot while she’s out of hiding. When the mouth closes, the helicopter will flip the screen again, putting you upside down and bringing back the lasers. The same cycle will repeat, with the helicopter turning the screen over and over. You can attack either the pilot or the lasers, so just keep firing off tracking shots until she goes down.

When you’re in the second phase fighting the puppies, as you attack them, the smoke produced by their jetpacks eventually turns dark. If you can successfully get all four puppies’ jetpacks smoking, then the helicopter will swoop in and eat them, taking you to an alternate phase 3.

The helicopter will grab the screen again, but this time, the puppies and the pilot will pop out of them and start throwing exploding pineapples at you. This phase doesn’t have any other tricks, so just do your best to dodge the puppies’ attacks and focus fire on the pilot, and you’ll take down the whole thing.

Congrats, you’ve successfully grounded the Howling Aces. Grab the Pineapple Mint and get back to finding the rest of the ingredients for the Delicious Last Course!