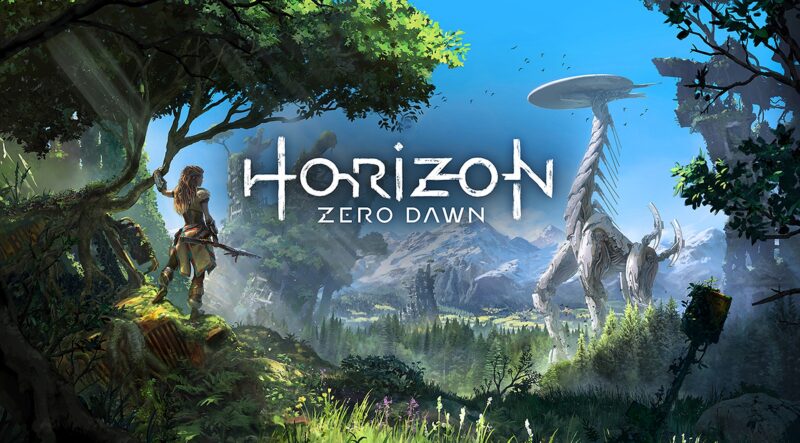 Horizon Zero Dawn is an action role-playing game played from a third-person view. Players take control of Aloy, a hunter who ventures through a post-apocalyptic land ruled by robotic creatures. Aloy can kill enemies in a variety of ways – setting traps such as tripwires using the Tripcaster, shooting them with arrows using explosives,and a spear. Machine components, including electricity and the metal they are composed of, are vital to Aloy’s survival; she can loot their remains for crafting resources. Ammo, resource satchels, pouches, quivers, resistance, antidotes, health potions, and traps can all be crafted.Weapons have modification slots for dealing more damage.

Aloy wears a Focus, a small head piece that scans machines to determine their susceptibilities, identify their location, their level, and the nature of loot they will drop. One machine, the Stalker, can enable cloaking technology to avert the gaze of Aloy’s Focus scan. Machines attack with defensive and offensive measures, and in either case react to a perceived threat by charging at it with brute force or projectiles. Exhibiting the behaviour of wild animals, some machines are inclined to move in herds, and others, with the ability to fly, do so in flocks. Unless hacked with the Override Tool, or sufficiently hit with corruption arrows, machines do not exert aggressive force against each other. Aloy also engages in battle with human enemies, such as bandits and the Eclipse cult.

Horizon: Zero Dawn presents us with a beautiful world full of unforgettable challenges.

A classy sandbox that stands out from the pack thanks to its brilliant battles against an array of fantastic beasts.

When the controls seep into your subconscious, heroic displays of cunning, might, and fearlessness lend Aloy a superhuman quality.