Top 10 Games to Play if you Like Skyrim: Elder Scrolls V 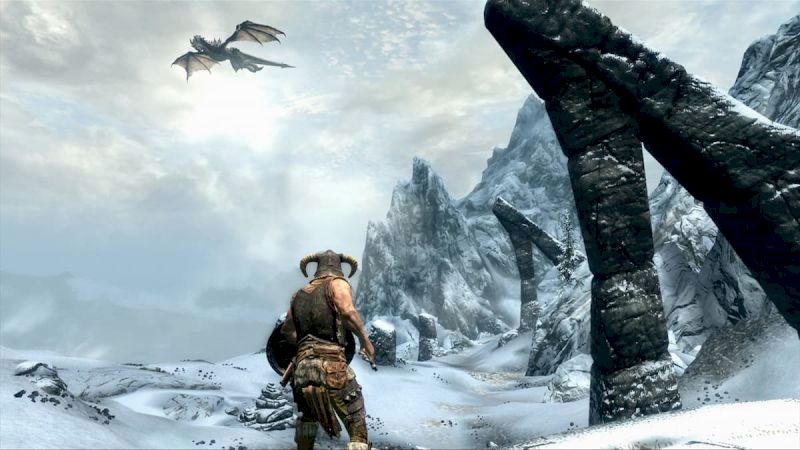 Because The Elder Scrolls VI’s official announcement trailer was released so early, many fans of Skyrim are getting impatient. The trailer for Skyrim’s newest installment blew fans away, and when it was announced that the game was still deep in production, many Skyrim fans were left feeling restless and disappointed. If you’re still waiting impatiently for The Elder Scrolls VI’s release date, try playing these similar games to get your Skyrim fix while you wait!

Elden Ring is a brilliant, open-world game that has blown countless fans away in the short time since its release. Elden Ring is like Skyrim’s older, more accomplished brother; if you like Skyrim but are craving more of a challenge, Elden Ring is the perfect game for you! This game is perfect for those that enjoyed the combat and strategy aspects of Skyrim the most. Elden Ring is an open-world RPG like Skyrim, so you can always go exploring if you need to take a break away from the story!

God of War is an amazing fantasy RPG. Rooted deep in action and adventure, this RPG rivals Skyrim in many ways, including in in-game combat. If you’re looking for a game like Skyrim with a heavy presence of combat and plot, God of War really takes the cake. This game also has very similar visuals to Skyrim, with wide-open landscapes and countless unique characters that help you along your journey!

The Legend of Zelda: Breath of the Wild

Breath of the Wild feels infinitely newer than it actually is, partly because even after half a decade, this game never seems to get old. With a franchise as old as Zelda, you’d think they’d eventually run out of steam for making deliriously amazing games, but you’d be wrong! Their latest installment to the franchise, Breath of the Wild, is still going strong and remains one of Nintendo’s most beloved games. This game has a lot of strategical elements and puzzles, so if you loved spending hours solving Skyrim’s many puzzle dungeons, this game is for you! This open-world fantasy game is great for Zelda fans and Skyrim fans alike; there’s really not much to dislike about this adventure RPG!

This open-world adventure game is set on a remote island, where players get to hunt for treasure alongside mercenaries and fellow treasure hunters, with none of the real-life responsibility! This game offers enhanced graphics and unique supernatural elements, if you like games that keep you on your toes, then Greedfall is the game for you. Greedfall masterfully combines action and fantasy in this adventure RPG game, you’ll love this game whether you’re a big fan of Skyrim or not!

Fans of J. R. R. Tolkein and The Hobbit will definitely appreciate this game. Middle Earth: Shadow of War has it all: dragons, action, adventure; this game even has orcs, just like Skyrim: Elder Scrolls V! Fans of Skyrim and Tolkein alike will love this game. Middle Earth: Shadow of War is like Skyrim, but with an extra heaping dose of fantasy. If you love the fantastical aspects of Skyrim more than the combat or strategy, then this game is perfect for you!

Fallout 76 may not be too similar to Skyrim in style, but it is similar in many other ways. Fallout 76 is an open-world survival game, where players must forage, hunt, and take down vicious enemies along their journey. In addition, Fallout 76 features beautifully detailed, sprawling landscapes, similar to Skyrim: Elder Scrolls V. If you loved being able to explore and collect powerfully unique weapons along with your adventures in Skyrim, you’ll love playing Fallout 76!

Skyrim: Elder Scrolls V definitively set a high bar for open-world RPG games, but that doesn’t mean no game can ever compare. If you’re still impatiently waiting for the release of the Skyrim’s newest installment, there are many more games comparable to The Elder Scrolls V! If you enjoy the open-world aspect of Skyrim over the combat aspect, try playing Mass Effect or Far Cry to get your open-world fix. Be sure to stick with Gamer Journalist if you want all the latest updates on the release of new games!