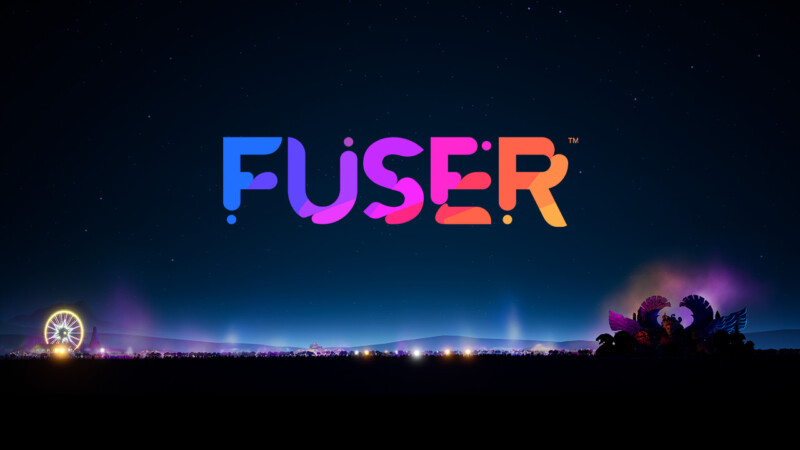 In Fuser, the player takes the role of a DJ at a large concert. They have a virtual DJ table with four record players, and a list of records (their crate) along the top of the screen. Each record has four tracks keyed by color and related to a type of musical instrument like drums, guitar or vocals. At any time, the player can place a record, then select a specific track from that record, and then place it on any of the record players. This adds that instrument’s track to the current mix across all four records, automatically adjusting the mix’s tempo and musical key. New record/tracks can be added to any record player, overriding the previous track in the mix. This concept is comparable to Harmonix’ prior game DropMix, which was a physical card game incorporating NFC technology with an electronic game board and mobile app that was published through Hasbro.

The game has a single-player campaign featuring multiple sets across various venues. At each set, the player attempts to make mixes, adding new tracks in time to the beat to score more points. Additionally, the virtual audience will throw out requests, such as for specific songs, songs from a specific genre, or a certain type of instrument. These requests vary based on the venue and other factors. Completing these requests in a short amount of time scores additional points. The player is ranked on a five-star scale based on their total score during the set. To achieve a high score, the player has the opportunity to customize the contents of the crate to be as efficient as possible in switching between tracks.

Fuser feels like a natural evolution for Harmonix and, scoring system aside, lets players take control of the music more than ever before.

Fuser’s core mashup-making mechanics are compelling, but they’re best enjoyed as a creative pursuit rather than a challenge-based game.

Just nominated it for best soundtrack. But i do have to agree with most everyone else. The price point vs content available is not worth 60 dollars. nor the DLC worth 40. Harmonix, please don’t pull cruddy cash grab schemes.