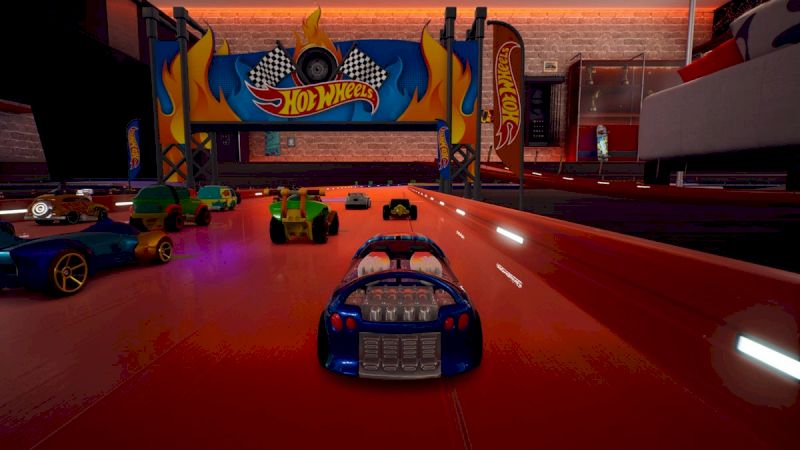 If you’re a gamer and a fan of Hot Wheels, then there is no better time to be alive as there are two really great games that allow for players to indulge themselves in their love of the die-cast cars. First, you have last year’s Hot Wheels: Unleashed which serves as a fantastic arcadey way to experience a whole slew of recreated Hot Wheels cars. More recently, you have the brand-new expansion for Forza Horizon 5, Forza Horizon 5: Hot Wheels, which brings in its own livery of vehicles to race with.

Though both games truly are fantastic in their own right, they’re also both incredibly different games. One is an arcade racer and the other is more of a simulation racer. There’s something to love about each title for all players but there’s definitely a certain draw that each will have for a specific player base. The cool thing is, there are a bunch of different cars throughout each one but they do have a few that overlap. Today, we’re going to compare how Forza Horizon 5: Hot Wheels and Hot Wheels: Unleashed handle their vehicles, deciding which has better cars overall.

Though there are many cars to compare, there are only 2 cars that overlap between Hot Wheels: Unleashed and the Hot Wheels expansion for Forza Horizon 5. For these, we’ll actually compare them head-to-head for a better example of the differences between these two games. There are other cars that are available in Forza that are also available in HW: Unleashed, and while they will play a role in the overall scope of how we’re judging this, those are originally from the Horizon 4 DLC pack and will not be competiting in the head-to-head portion. Now that we’ve laid the ground rules, let’s dive right in!

Bad to the Blade

When it came to how this car was executed between the two, the Bad to the Blade in Forza definitely feels more finely tuned in terms of how it handles. This is to be expected, but what I found most interesting is that I actually preferred how the Bad to the Blade controls in HW: Unleashed as the car seems to work better with the tracks in that game, overall. So, while Forza does a better job with the car, Unleashed has just a better racing experience all-around, if that makes sense.

On the flip side, Forza hits the nail on the head with the Deora II in terms of both how it feels to drive and how it works in conjunction with the tracks. The HW: Unleashed version is great too but this one is just better, plain and simple. I think the thing that works best for the Forza version is how distinct it is to drive. It’s hard to explain but it kind of surfs the tracks, which is funny as it has surfboards attached to it.

Now that you’ve been given a gist of how the cars work between these two games, we can look at all of them overall and decide which of the two has the best. The criteria we’ll be judged on are Looks, Feel, and Customization.

When it comes to judging which of these games’ cars look better, it all really comes down to preference. Honestly, they both look fantastic, and the attention to detail in both shows just how seriously the developers took the task and delivered ten-fold.

Forza takes a very realistic approach to the car designs in this game. And I don’t just mean in visual execution. These cars are literally a realistic recreation of Hot Wheels cars. A lot of Hot Wheels cars aren’t really too realistic when it’s an original design, so Playground Games took some liberties when it came to translating them to the grounded realism prevalent in Forza Horizon 5. It’s actually a really unique and genius way of bringing these cars to life for real.

There really isn’t anything to complain about with this approach, though it would’ve been cool to see a little bit of experimentation with some of the designs. Though these are realistic versions of some of our favorite cars, many of them in this title just don’t feel like Hot Wheels cars but just more Forza vehicles added in. It seems like this game kind of plays it safe in that regard.

Opposing that idealogy, Hot Wheels: Unleashed takes a purist’s approach to its car designs. Though more cartoonish, the cars within this title are absolutely beautiful recreations. The plastics, metals, and intricate designs are all handled perfectly, making this feel like the best way to experience the look of these fantastic vehicles. Honestly, there are so many beautiful cars in this game, that, even after playing Forza, they still seem like the truer Hot Wheels replicas overall.

I also appreciate the more experimental route that this game takes. As it doesn’t try to base itself on reality, there are some insanely cool cars that you would not see driving any roads. Between the Mystery Machine, a hot dog car, and a Santa sleigh, you really can’t get any more “Hot Wheels” than this. It’ll make you feel like a kid again.

Playground Games did a fantastic job of trying to bring these mostly fictional cars to life in a realistic way. I actually liked how many of them drove with some being clear standouts above the rest. Speed, handling, and drifting are the three things that I look out for, and loved how well the devs did with making each feel wholly unique from one to the other.

My complaint about the driving though isn’t just something limited to this DLC though, as I’ve never been a real fan of the way that the cars in Forza are so easy to spin out. There’s nothing worse than making a slight mistake that results in you totally blowing out your position in a race.

I really love how well the cars handle tracks in HW: Unleashed. It can feel like a thrill ride most of the time which makes races feel extremely exciting. There really never is a dull moment when it comes to driving each of the unique cars in this title.

I will say though that Forza does a better job at making cars feel different from one to the other. I appreciate the cars in HW: Unleashed but they aren’t as balanced as they could be. As it’s an arcade title, this is to be expected but I still think Forza takes the win in this area because of how much more fleshed-out it is overall.

When it comes to how much you can do to these cars, Forza has a lot to offer. You have the custom paint jobs and decals which really allow you to have fun with these cars and even make them look a bit more Hot Wheels-like. Some of the designs you can pull off are absolutely insane.

Additionally, you can also heavily upgrade performance as well which can totally change a car’s performance, thus making it a better fit for you. Though I will point out that all of these customization options whether cosmetic or performance upgrades can be a bit difficult to navigate, causing more confusion than needed.

I will argue that while Forza maybe goes too far with its performance upgrades, HW: Unleashed doesn’t really go far enough in that aspect. There really is no happy medium here and is going to leave fans either wanting things to come easier from Forza or wanting more out of HW: Unleashed.

When it comes down to it, choosing a winner between these two fabulous games is no easy task. You have one that’s been painfully crafted to bring the Hot Wheels brand to life as real cars and on the other hand, you have a game that was meticulously put together in order to take the joy of racing Hot Wheels to the next level. They both do their jobs so well, and it really is a night and day comparison.

If I had to choose from who out of these two has the best cars though, I’d have to say the winner would be Hot Wheels: Unleashed. From looks, feel, and variety, this game is a more complete Hot Wheels experience compared to what Forza offers. Though that game has beautiful visuals, most of the cars seem more like Forza cars but with a Hot Wheels sticker on them.

Hot Wheels: Unleashed is first and foremost a Hot Wheels game and stays true to the overall embodiment of what that should feel like. Though you can’t go wrong with choosing either of these, you’ll get the most for your money if you go with Hot Wheels: Unleashed. It’s the better of the two.