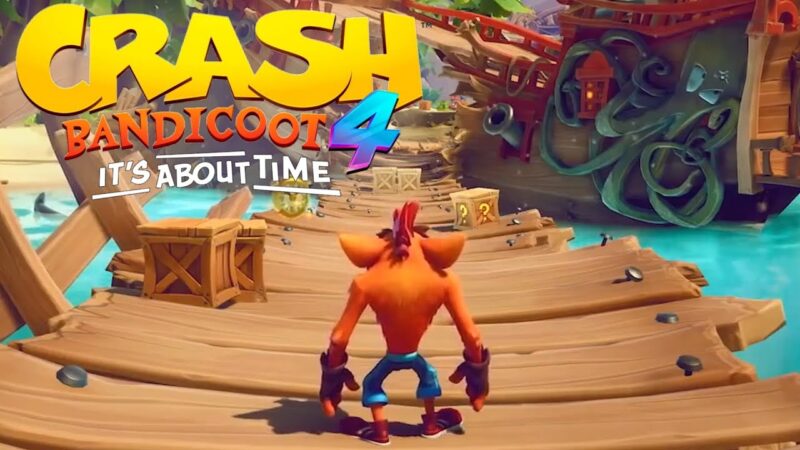 It’s About Time places players in control of five playable characters as they traverse multiple levels, each filled with enemies, crates, Wumpa fruit and hazards, with the objective being to get from the start point to the goal as with the original trilogy. The game features two different game modes for players to engage in: Retro Mode, which focuses on the use of limited lives that require players to find additional ones during levels and forces them to restart a level should they run out; and Modern Mode, which replaces lives with a death counter that keeps track on each death in a level by its respective playable character. In addition, levels feature two separate variations, each of which features their own layout of hazards, enemies and objects – main story and “alternate timeline”.

Main story levels focus on players controlling Crash and Coco, both of whom use identical movesets such as spinning and sliding, alongside new moves to the series such as wall running. In these levels, the characters are aided further by special masks, each of which is rescued during the story and who offers their powers – each level features at least one such mask being available to help traverse obstacles during certain segments, appearing before the player enters and leaving when the segment is traversed. Each mask has a specific property that dictates how it can help players overcome obstacles – for example, phasing objects in and out of existence.

Alternate timeline levels focus on players controlling one of three other playable characters during these levels: Doctor Neo Cortex, Dingodile, and Tawna. Each character features their own unique playstyle and moves to overcoming obstacles and completing their levels. Cortex makes use of a raygun that not only can be used to attack, but which can be used to transform enemies into platforms – both solid and bouncy – along with being able to perform a forward dash. Dingodile primarily makes use of a vacuum gun, which can be used to suck up and fire enemies and objects. Tawna, while maintaining some moves used by Crash and Coco, makes use of a grappling hook to hit objects from long distances.

Crash Bandicoot 4 is a great return to form, with some new ideas that add a fresh spin to Crash’s classic gameplay.

A top-tier platformer that recaptures the magic of the late ’90s, Crash Bandicoot 4: It’s About Time is an absolute blast to play, and a visual feast for the eyes.