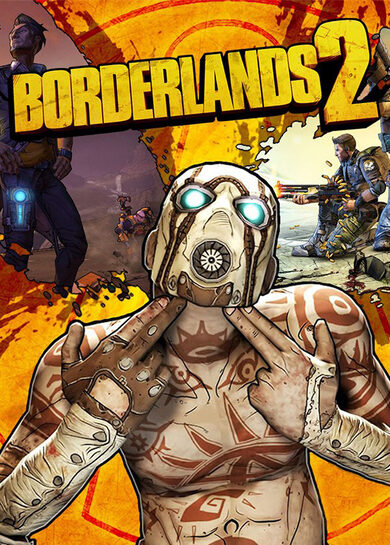 Borderlands 2 is a first-person shooter video game developed by Gearbox Software and published by 2K Games. Taking place five years following the events of Borderlands (2009), the game is once again set on the planet of Pandora. The story follows a new group of Vault Hunters who must ally with the Crimson Raiders, a resistance group made up of civilian survivors and guerrilla fighters, to defeat the tyrannical Handsome Jack before he can unlock the power of a new Vault. The game features the ability to explore the in-game world and complete both main missions and optional side quests, either in single-player or online cooperative gameplay. Like its predecessor, the game features a procedurally generated loot system which is capable of generating numerous combinations of weapons and other gear.

The game received critical acclaim upon release. Critics generally praised the game’s visuals, writing, gameplay, and online multiplayer, while criticising its mission design and content fillers. The handheld and the virtual reality versions of the game were regarded to be inferior to the console and PC versions. More than 20 million units were shipped upon release and the game became 2K’s most successful release. It was nominated for multiple year-end accolades by several gaming publications. Gearbox supported the game with four add-on campaigns, new characters and five content packs. The game was followed by Borderlands: The Pre-Sequel in 2014 and Borderlands 3 in 2019.

Love to collect loot, level up a hero and shoot guys in the face? Then get Borderlands 2 right now.

An even more satisfying and tactically interesting shooter, with great missions and excitingly random guns.

Borderlands 2 doesn’t reach far beyond its predecessor’s scope, but it does do almost everything better. Additions, refinements, and fixes all combine to create an appreciably improved experience, one that fully delivers on the promise of the first game.