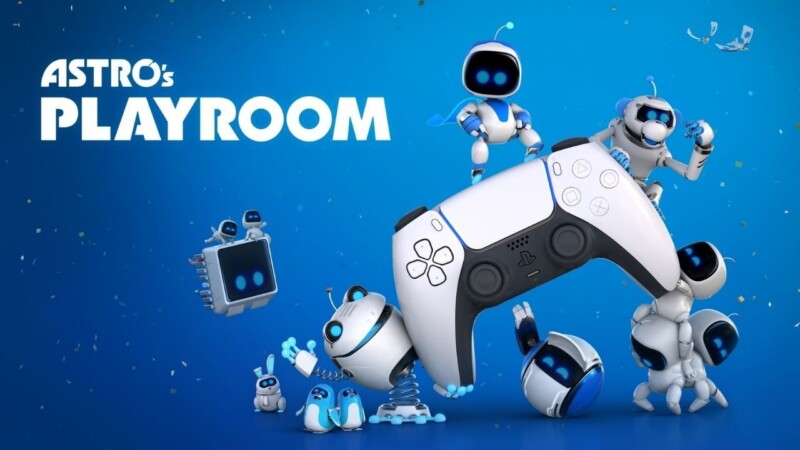 Astro’s Playroom is a 3D platformer in which the player controls Astro Bot using the DualSense controller. Like the previous game, he is able to jump, hover, punch enemies and objects as well as spin attack by charging his punch. The haptic feedback of the controller is used to provide realistic tactile vibrations from actions such as walking on different types of material, walking through rainfall and into wind. The game starts in a hub world called CPU Plaza which is modelled after the inside of the PlayStation 5 console and provides access to four worlds which are each themed after a component of the console: GPU Jungle, Cooling Springs, SSD Speedway and Memory Meadow. The plaza also houses two other areas: Network Speed Run, in which players can compete in unlockable time trials for the fastest time which can be shared to online leaderboards, and PlayStation Labo, which houses all of the collectables a player has collected.

Each of the four worlds is split up into four levels that are interconnected with each other. Two of these levels involve regular platforming whereas the other two involve a special power up suit which makes use of the Dualsense controller’s capabilities. For example, a frog suit with a spring at the bottom in which the controller must be tilted laterally to guide the frog and the trigger pressed down to compress the spring, which offers resistance similar to how a real spring would using the adaptive trigger system. Another example is the ball suit in which the player must swipe the touchpad to guide the ball. Each world contains three types of collectable: coins, puzzle pieces and artefacts. Coins can be used at a gacha machine in PlayStation Labo to potentially obtain collectable in-game figurines as well as more puzzle pieces and artefacts. Puzzle pieces are used to fill in a random section of the mural which adorns the walls of the PlayStation Labo area.

Finally, artefacts are 3D rendered representations of real-world objects from the history of PlayStation, such as consoles, controllers and accessories. When collected, the player is able to examine them by moving the Dualsense controller around and interact with them using the touchpad or built-in microphone. Artefacts are stored in PlayStation Labo where Astro Bot (and many other robots) can later interact with them by punching or jumping on them. The worlds also contain large amounts of robots performing various activities, including acting out scenes from various PlayStation exclusive (or former exclusive) game franchises such as God of War and Resident Evil. At the end of each world there is an area inspired by the startup sequences of the previous four PlayStation home consoles, where the player receives an artefact of the respective console as a reward for completing the world.

Astro’s Playroom is a great showcase for the varied, impressive ways the DualSense can immerse you in next-gen games.

Transcending its role as an introduction to the PS5’s features, Astro’s Playroom is a quick and delightful celebration of PlayStation’s history.

Astro’s Playroom is a mindful little wonder that makes you appreciate every piece of the PlayStation puzzle, providing an experience that will stay with you long after the six-hour runtime. Come to learn more about your new console and leave with a cannon-blast of nostalgia, alongside a lasting impression about the next-generation of immersion and gameplay.