All Call of Duty (CoD) Games Release in Order 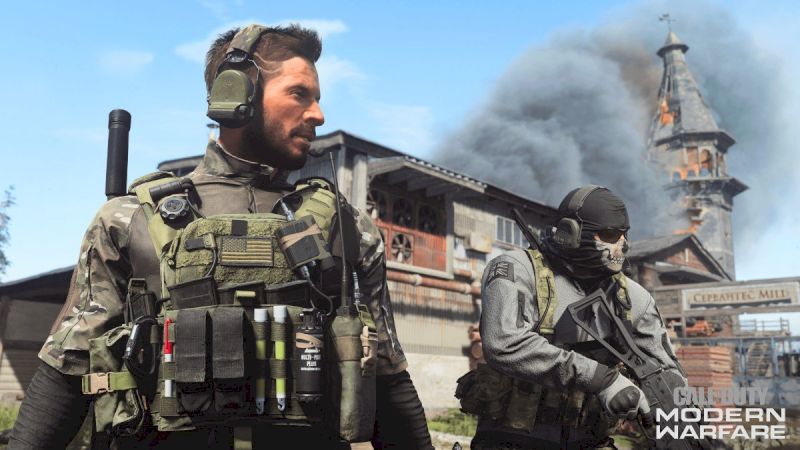 We’ve gone back and listed every mainstream Call of Duty game by order of release. We’re ignoring spinoffs for brevity’s sake – they don’t impact the franchise’s history and there are just too many of them.

Instead, we’re running through the main games so that we can get a proper look at the history of Call of Duty and witness what made one of gaming’s biggest name-players into the juggernaut it is today.

The first CoD game to ever release was all the way back in 2003. Like almost all shooters at the time, it was based in World War 2. Despite being around for the PS2 era, this Call of Duty was released primarily for PC.

CoD 2 didn’t make any massive innovations in the series, although it did sell slightly more units than the first game – likely because it was released on the Xbox 360 alongside PC.

Call of Duty 3 was the first game Treyarch ever produced for the franchise. It did well in sales, a lot better than the previous two games, but it kept the Call of Duty series back in the World War 2 era. There was no way for CoD to stand out amongst a sea of other 1940s-inspired media.

Call of Duty 4: Modern Warfare changed everything. It was a game release that altered the course of videogame history for over a decade. It sold more than double the units CoD 3 sold, and nearly four times as many as CoD 1 sold.

The catalysts for CoD 4’s success are varied. First, it was the first CoD game to pull the setting out of World War 2 and into the present day. While modern shooters are everywhere now, this was a rarity in 2007. It brought with it a level of grit, edge, and modern relevance that intrigued and hooked fans.

Ironically, after the success of CoD 4 launching the game series into the modern world, the very next title brought it back to WW 2.

Call of Duty: World at War was a great game regardless, but it didn’t see any growth from 2007. In fact, WaW and MW sold around the same number of units at launch – despite World at War introducing us to Nazi Zombies.

CoD 4 first launched Call of Duty into the mainstream, but MW2 was the game that cemented the series as the FPS giant it is today.

Call of Duty: Modern Warfare 2 sold over 10 million more units than World at War and CoD 4. It became the game of a generation and indoctrinated millions of players around the globe into the Call of Duty family.

MW2 would be the last major success the CoD franchise saw until CoD Mobile and Warzone at the tail-end of the 2010s.

Call of Duty: Black Ops sold a modest five million more copies than MW2 and started off the Black Ops continuity. While its multiplayer was great, fresh, and wildly innovative, most people’s fond memories of this game actually come from the campaign – an oddity for CoD games.

Black Ops introduced us to beloved characters like Mason and Wood that would rival Price and Soap. It also gave us a story unlike anything the series had seen at this point – dealing with the CIA’s Project MKUltra during the Vietnam War.

Modern Warfare 3 closed out the original Modern Warfare storyline, but aside from that didn’t do anything too outside the box. It included a new perk killstreak system in multiplayer, but that’s about as innovative as it got.

This was actually the first time that a CoD game didn’t outsell its predecessor – granted it wasn’t by much at this point.

Call of Duty: Black Ops 2 is widely believed to be the best game in the series. It’s also culturally significant for a good number of reasons.

First, it managed to hold off the slump that was yet to come, selling around the same number of units as Black Ops 1. It also brought the franchise into the future, with tech-inspired weapons, maps, and killstreaks.

While the multiplayer here was the best the franchise has ever seen, so too was the campaign – featuring a lengthy story with different endings. side missions, and secret choices that affected the outcome of the narrative.

BO2 is also the game that expanded on and cemented zombies as a franchise main attraction. While TranZit wasn’t fondly received at the time, the game overall had some of the best zombies maps to ever release – both for story and gameplay.

Lastly, it was the launching point for Call of Duty Esports. Grassroot CoD Esports has influenced the wider world of Esports and content creation far more than people realize. Nadeshot got his start here, Courage did too, and this was the game that turned Optic into a fan-favorite powerhouse.

Sales slumped again for Call of Duty: Ghosts, perhaps because it was the first game in a while that wasn’t a part of a pre-established story; or maybe it was just too grey and boring. Either way, CoD Ghosts was unremarkable.

Call of Duty: Advanced Warfare was the first crack Sledgehammer games had at the series. Unfortunately for them, it did far worse commercially than Ghosts. AW only sold 21 million units. That’s down nearly 10 million compared to Ghosts.

One of the leading factors for this is likely that it was the first jetpack-based Call of Duty game. Advanced Warfare did away with the traditional boots-on-the-ground approach in favor of something fresh to shake up the stale CoD formula.

This, along with other small influencers like AW introducing loot boxes to the franchise, are likely what led to that game’s poor sales.

Treyarch tried its absolute best with Black Ops 3 to breathe some fresh life into Call of Duty. For the most part, the studio succeeded. BO3 sold a fair bit better than Advanced Warfare, granted it didn’t reach pre-Ghosts heights.

It was the first game to introduce character-based gameplay. There were different pickable agents each with their own unique ability that was treated like an in-game killstreak.

The title also refined the jetpack-style gameplay that AW introduced, swapping out the quick, burst-based movement for something a little more smooth – a change appreciated by most of the community.

Unfortunately for Treyarch, all the hard work they put in keeping CoD alive with BO3 was undone with Infinite Warfare.

Call of Duty: Infinite Warfare was catastrophic for the franchise. While sales had been shaky for years now, IW was effectively the straw that broke the camel’s back. It sold 13.6 million units – half of Black Ops 3.

The game brought players to space. That’s it, that was IW’s selling point, and that’s the reason the game failed. Okay sure, multiplayer wasn’t space-based combat, but it was a clunkier version of the multiplayer from BO3. Infinite Warfare didn’t make any improvements on the games that came before it. In fact, it was actively worse.

After seeing how disastrous space had been, the series did a complete 180 and brought everyone back to Call of Duty’s roots with WWII.

The game sold just under 20 million units, so it did comfortably outsell IW. However, it wasn’t very fondly received by the community at large. The maps were grey and boring, and the multiplayer was clunky. Despite that, it was a far superior experience to that offered by IW.

Would you believe that Black Ops 4 was a commercial failure despite the success of the previous Black Ops games?

Unfortunately, that’s the reality. Black Ops 4 barely sold more units than Infinite Warfare – highlighting just how much damage has been done to Call of Duty’s reputation at this point. It was the first game in the series without a campaign – indicative of a rushed development. Other than that, it was relatively unremarkable with boring boots-on-the-ground multiplayer.

At this point in history, Call of Duty is dying. It’s on its last legs and needs to do something dramatic to turn things around. That’s exactly what happens over the course of 2019 and 2020.

It’s hard to quantify the sales of Call of Duty Mobile, but we can say that they’re really, really high. As expected from a mobile game, CoD Mobile had, and has, massive reach and brought in a veritable fortune for Activision. Mobile games are profitable, and this one was no different.

Call of Duty Mobile put CoD back on the map. Modern Warfare capitalized on this success. The game sold 30 million units, which is more than double Black Ops 4. It hit a sales figure that the franchise hadn’t seen since the golden days of Black Ops 2, so it was a massive hit that CoD desperately needed.

Modern Warfare brought us a reimagined cast of characters with Price, Soap, and more. Its campaign was heavy and gritty, something welcome and sorely missed. Its multiplayer was also fun and well-refined.

All in all, Modern Warfare 2019 was a high-quality Call of Duty game, and that was exactly what the franchise needed right now.

One can argue that Call of Duty: Modern Warfare saved the series, and they would be right. But Warzone shot its popularity into the stratosphere.

At the time of Warzone, Fortnite was coming up on the peak of its popularity. Every new battle royale game that came out was asked the question “are you the Fortnite killer?” Warzone is the closest any BR has gotten to saying yes.

While it far from killed Fortnite, it did offer players a realistic alternative to the cartoon style that Fortnite was known for. There was no building, either. Warzone was the first BR to offer a traditional FPS experience in battle royale form, and it benefited greatly because of that.

Oh, it also came out right at the start of the Pandemic when everyone was being told to stay home, so there’s no doubt that dramatically helped Warzone’s performance.

For the most part, the game was fine and it sold well. It was rather unremarkable, though, considering it came out the same year that Warzone did.

2021’s Call of Duty Vanguard was a commercial and critical failure. Its development was no doubt made difficult by the global Pandemic, so that absolutely factored into the figures here.

Vanguard was the worst-selling game in years for Call of Duty. Despite that, it was a bestseller for 2021, so that perhaps speaks more about the state of the market at the time rather than the state of the game.